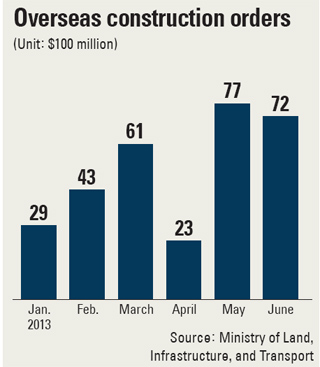 Overseas construction orders won by Korean builders fell in the first half of the year, the Ministry of Land, Infrastructure, and Transport reported yesterday.

The ministry said 191 Korean companies collected $30.5 billion from 348 overseas construction projects from January through June, down 5 percent from a year ago. However, the ministry said the value of orders has been growing steadily each month and Korea has been named a preferred bidder in two of nine water restoration projects in Thailand worth $5.5 billion.

By region, orders from Asia accounted for 41 percent of the total in the first half at $12.54 billion. This is nearly double the $6.6 billion collected from Asian projects last year.

Orders from the Pacific Northwest area also saw a big boost, thanks to Samsung C&T which secured the $5.85 billion Roy Hill iron ore project in Australia.

In contrast, orders from the Middle East, traditionally the No.1 foreign revenue source for Korean builders, dropped to $10.68 billion from $20.1 billion last year. The ministry said a series of orders are in the works and expects business in the region to be back on track soon.

However, it warned it is possible orders could go down and contracts could be delayed due to the sluggish global economy and likely tapering of quantitative easing in the United States.

The ministry said it will dispatch ministerial-level delegates in the third quarter to various countries to check on market conditions and promote Korean companies. It will host the Infrastructure Cooperation Conference in mid-November to help local companies connect with important international players.