Korea has boom in cooperatives

Korea has boom in cooperatives 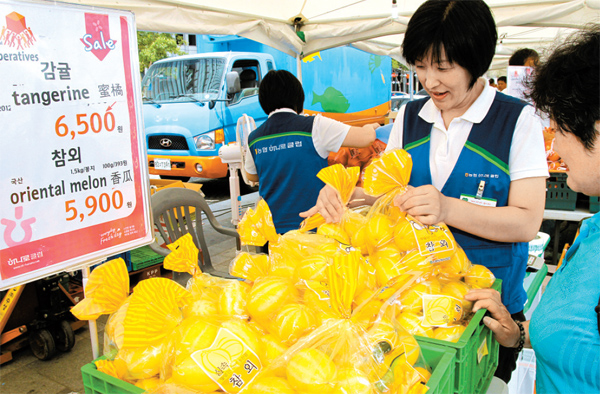 Cooperatives, autonomous associations of people who band together for mutual economic benefit, have been booming in Korea.

Since the Seoul Metropolitan Government’s announcement of a plan to establish more cooperatives to help revive small businesses and create jobs, more than 1,200 cooperatives have been established nationwide since December.

After a new law was enacted, cooperatives for the public interest or profit could be established by groups of five persons or more.

“The Seoul Metropolitan Government aims to establish 8,000 cooperatives over the next 10 years and increase the size of the cooperatives so they add 14 trillion won ($12.3 billion) to the economy, or 5 percent of the gross regional domestic product,” said the Seoul Mayor Park Won-soon, earlier in February.

President Park Geun-hye has said the government will actively support cooperatives of small businesses that use group purchases and sales to increase profitability and bargaining power.

The government believes the system will redistribute the economic pie by boosting local economies and fostering small businesses. 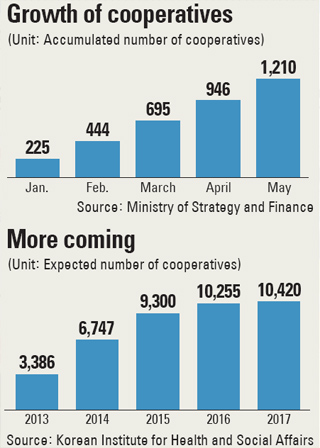 It has a budget of 8.6 billion won this year, with 100 million won earmarked for rental deposits and 80 million won for operating expenses.

Recently, however, the focus has shifted to whether the cooperative model, which has thrived in Europe and other developed economies, can succeed in Korea.

Some doubt that in an economy dominated by large corporations with big money, small cooperatives can be competitive.

In the agricultural sector, large retail corporations speculate using lump sum payments to farmers for their labor and produce rights, from planting to harvest.

“I received 50 million won from a big retail corporation earlier this year in return for my harvest at the end of autumn,” said Kim Chang-sung, a tangerine farmer on Jeju Island.

For farmers, getting paid up front by large corporations could be easier and more beneficial than establishing cooperatives themselves or dealing with small cooperatives.

In terms of industrial goods, big corporations with deep pockets have more bargaining power to deal directly with factories to produce their own private brand goods.

In addition, experts also warn that blindly jumping into cooperatives could be dangerous as unlike most people’s expectations, the government and the local governments will not be able to financially support all the newly established cooperatives.

“Currently, people tend to take only overly optimistic views of cooperatives. However, the cooperative is not a solution, but a business framework. They must recognize this to create a clear business model and understand the purpose of establishing a cooperative,” said a research fellow at the Korean Research Institute of Cooperatives. “Without thorough preparation and business plans, it will be difficult for cooperatives to survive.

“Although it is encouraging that cooperatives are being established in various business areas with the implementation of the law, expectations for cooperatives, which are still in their infancy, are too high.”

Many think cooperatives might fail just like social enterprises that rely only on government subsidies or venture companies that aim at making a fortune in one fell swoop.

“Anyone can establish cooperatives, but they cannot become a substitute for job creation. It is important for them to be fostered through continuous support by the government and civil society,” said Lee Hae-bum, manager of the Chagup Mall, a start-up Web portal.

Alongside the many cases of successful cooperatives overseas, there also are failures.

Since 2000, large U.S. agricultural cooperatives Farm Land and Eggway collapsed and the Dutch gardening cooperative Beon has been dealing with management difficulties.

“There have been cases in the United States where some large cooperatives are in self-inflicted crises due to members’ demands as they grow, which make them difficult to operate effective businesses,” said Chang Seung-hee, a research fellow at LG Economic Research Institute in a recent report.

“Also, as members can freely join and leave, there are weaknesses in raising and maintaining capital. It is also difficult to receive investments,” said a professor, who wished to remain anonymous.

“Thus, without continuous government support through tax incentives and financial subsidies, cooperatives that do not reach a certain level or secure enough members could hardly sustain their businesses or compete with corporations.”

Meanwhile, the Seoul government is paying attention to the successful foreign cooperative examples - such as Spanish football team FC Barcelona and American soft drink brand Sunkist - which tend to effectively maintain membership levels and contribute to society even at times of economic crisis.

In the case of the FC Barcelona cooperative, 190,000 people became members by paying subscription fees to select the owner of the football club. Sunkist, founded in 1893, is a cooperative of 6,000 tangerine farmers in California and Arizona.

A recently released 2013 Cooperative Survey Report by the Center for Social Economy also showed that the viability of Korean cooperatives was healthier in general than small independent businesses in the same sectors.