President Park Geun-hye, left, waves to Chinese tourists, right, who cheer her yesterday on her way to the Terracotta Warriors and Horses Museum in Xi’an to see the ancient sculptures depicting the armies of Qin Shi Huang, first emperor of China. [Joint Press Corps]

XI’AN, CHINA - President Park Geun-hye urged the people of China to join her endeavor for a better future for their countries, promoting her vision of trust-building on the Korean Peninsula and in Northeast Asia and the importance of bilateral friendship and partnership for shared prosperity.

Park wrapped up her four-day state visit to China yesterday, which included a series of meetings with China’s most influential leaders, businessmen from the two countries, a speech to university students and a visit to a historic site.

While the focus of Park’s first two days in Beijing was to bolster Korea’s political ties with China, including efforts to address North Korea’s nuclear weapons program, her weekend in China aimed at promoting exchanges between the Korean and Chinese people.

After speaking at Tsinghua University in Beijing on Saturday, Park stayed in Xi’an for two days to observe China’s grand project to develop the western region and visit a famous cultural heritage site.

Before a group of students and faculty at the alma mater of Chinese President Xi Jinping, Park spoke in Mandarin Chinese for her greetings, opening remarks and closing, in which she quoted a classic Chinese lesson to highlight the importance of education.

On top of the two countries’ thousands of years of exchanges throughout history, Park said bilateral cooperation has grown rapidly since the establishment of diplomatic relations in 1992. Park said the time has come for the two countries to add more substance to their partnership by building trust between their leaders. 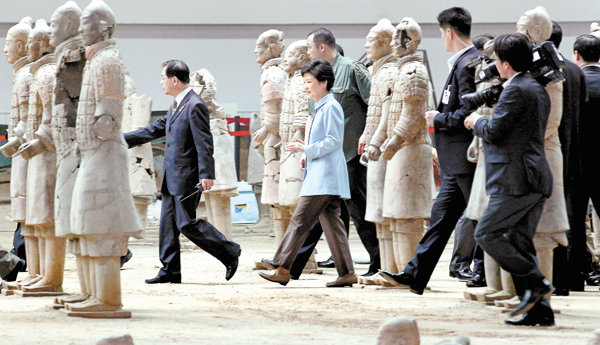 “I want to start a journey of trust for the next 20 years that will go beyond the success of Korea-China relations for the past 20 years,” she said, adding that she and Xi share a vision after their summit last week.

Park said her Northeast Asia peace and cooperation initiative, also known as the “Seoul process,” can be a good way to build trust in a region of ancient conflicts and longstanding rivalries.

She explained that countries of Northeast Asia can start to build trust by cooperating in softer programs dealing with the environment and disaster relief issues, and then expand their cooperation to more sensitive political and security issues.

To this end, Park said the most urgent task is creating a “new Korean Peninsula” where peace is established and the people of the two Koreas can interact freely. Ending North Korea’s nuclear arms program, which threatens peace on the peninsula and in the region, is a key part of her vision, Park said, adding that a peaceful peninsula would support China’s prosperity.

“Northeast Asia, free from the geopolitical risk of the North’s nuclear program, will become the global growth engine with its ample workforce and world-best capitals and technologies,” she said, asking the young people of Korea and China to build this grand future together.

Park also introduced the audience to her belief in training her mind and body even in the face of despair and urged the students to have the courage to realize their dreams for a better future.

It was the first time a South Korean president had used Mandarin Chinese in a speech, and it drew widespread attention from the media and ordinary citizens. The next day, all four popular portal Web sites in China, including baidu.com, loaded their top news as Park’s speech.

“President Park spoke about her life story and emphasized ‘trust’ [in a relationship with China], appealing to the students,” said an analysis by the People’s Daily Online. “This kind of diplomacy of humanity will be a great help to boost cooperation with China and the regional security in North East Asia and the trust-building process, which Korea is pursuing.”

“President Park mentioned ‘the dream of Korea’ for the first time and she said this dream is consistent with the ‘dream of China,’ which proposes to cooperate with each other based on mutual dreams,” said the Beijing News, a state-controlled local newspaper.

“While women’s power is growing worldwide, President Park clearly appealed as a consistent, moderate and kind leader with a strong will,” said Yang mo, a doctoral student at the School of Public Policy and Management at Tsinghua University.

“I felt she was considerate because she dressed in a purple jacket, which is also the color of the insignia of the university,” said Liang Ye Zhen, a student at Tsinghua University’s Center for Nano and Micro Mechanics. “She also appears to have a deep understanding of China, which would become a good basis for China-Korea cooperation.”

Wrapping up her stay in Beijing, Park headed to the capital of Shaanxi Province on Saturday, wher she dined and met with regional leaders.

On her way to enter the museum building, roughly 1,000 Chinese tourists flocked to her to take a photo. She waved her hand and said she “really appreciated” their attention.

In the visitors book, she wrote, “I felt the essence of the Chinese culture through the warriors.”

In an interview with Shaanxi Television in Xi’an, Park said: “For a long time, I had a hope to visit here … It is indeed surprising that these delicately crafted warriors have been kept for thousands of years. I once again realized the great culture that developed the human beings.”

When she was hailed by the Chinese tourists, Lee Jung-hyun, a presidential secretary for public affairs, observed, “This is the accomplishment of her diplomacy with China.”

The Blue House said Park chose to visit the historic city over the economic hub of Shanghai because she believes communication and understanding through cultural exchange is as important as economic and security issues, the Blue House said yesterday.