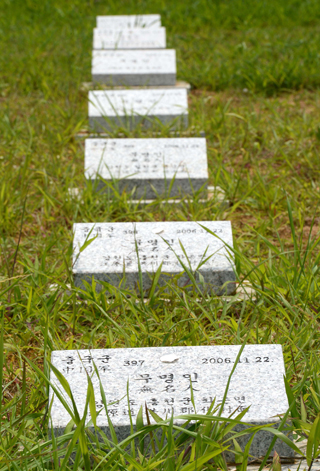 The remains of unnamed Chinese soldiers from the Korean War lie in a cemetery in Paju, Gyeonggi. [NEWSIS]

BEIJING, CHINA - President Park Geun-hye proposed returning the remains of about 360 Chinese soldiers buried in South Korea in a meeting with Chinese Vice Premier Liu Yandong during her four-day trip to China.

During their meeting Saturday, Park said this year marks the 60th anniversary of the 1950-53 Korean War armistice and the proposal serves the theme of her trip: “A Journey of Hearts and Trust.”

“So far, the Korean government has managed these remains, but I know the Chinese families of the soldiers must be waiting for their return,” she said, according to the Blue House. “So I propose repatriating the remains to their homeland, then, how do you think?”

Liu welcomed her proposal, according to the Blue House.

“I really appreciate (your proposal),” Liu said. “The special treat and your friendship was clearly expressed to us. The families are waiting.

“I will immediately report this to President Xi,” he continued. “It is really meaningful to upgrade Korea-Chinese relations to the next level.”

The remains of the 360 Chinese soldiers who fought with North Korea and died during the 1950-53 Korean War are buried in the so-called “Enemy Cemetery” in Paju, Gyeonggi province, north of Seoul.

The cemetery contains the remains of about 500 soldiers, including about 200 North Korean troops and spy agents sent from Pyongyang to infiltrate the South.

“Both the Chinese and Korean people are Asian and we are both affected by Confucianism, which taught us the importance of family and ancestors,” Kim Haing, spokeswoman of the Blue House, said at a press meeting Saturday.

“It is really regrettable for their bereaved families and descendants to keep the remains in a foreign country.”

She asked Zhao if he could consider building a monument at the site where Korean independent guerrillas who fought against the rule of imperial Japan stayed in the 1940s.

The fighters, dubbed the “Liberation Army,” were based in several Chinese provinces, including Xi’an, educating Korean guerillas and working for the Korean interim government in Shanghai.

However, after World War II, Korean administrations paid little attention to the sites and concerns grew over poor management.

“The Korean government has prepared a project to build a monument in Duquzhen, Xi’an, since 2009, where the Korean Liberation Army stayed in the 1940s,” she said.

Zhao offered a positive response, saying the request will be reviewed.

According to the Blue House, during her luncheon with Chinese President Xi Jinping, Park also proposed a monument for Ahn Jung-geun, a renowned Korean fighter who assassinated former Japanese Prime Minister Ito Hirobumi in 1909 in Harbin, China. But she reportedly avoided criticizing Japan during her proposal.