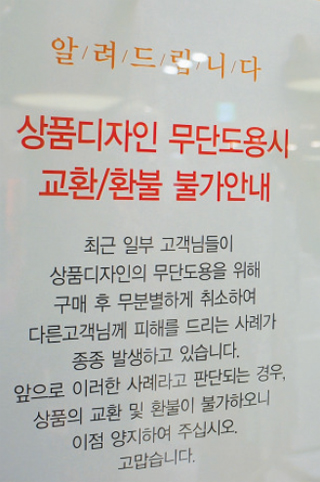 A notice at a store says that no refunds or exchanges are allowed if a customer tries to return a product after copying it. The notice was placed in a mall filled with shops run by up-and-coming designers, who are the most frequent victims of the fashion copycats. By Ser Myo-ja

“It’s just disgusting when you find cheap, shoddy copies of your designs,” says Kim Chae-yeon, the designer for the women’s shoe label, Starlet Ash. “You spend months creating the design, selecting leather and other materials, producing prototypes and making modifications. And all it takes is a week for the copies to appear.”

Kim has designed women’s shoes for years and her products are sold at major department stores, on the Internet and on TV shopping outlets such as Galleria Department Store and Lotte Home Shopping.

She says her career as a designer has become a never-ending battle against brazen rip-off artists who simply steal her designs, churn out nearly identical copies and sell them at cheaper prices in Seoul’s fashion mecca of Dongdaemun Market.

That’s competition that is impossible to beat and completely unfair, she says. “You feel very empty when you run into them.”

Korea is one of the most fashion-conscious countries in the world, but designers have it rough because protection of their work - their intellectual property rights - is weak.

The 24-hour Dongdaemun market, which only closes a few days of the year, is the hub of the rip-off industry, although the Internet has also become a prime mover of rip-off designs. The thieves can rely on local factories to do the production work or, even cheaper, mass production in factories in China. 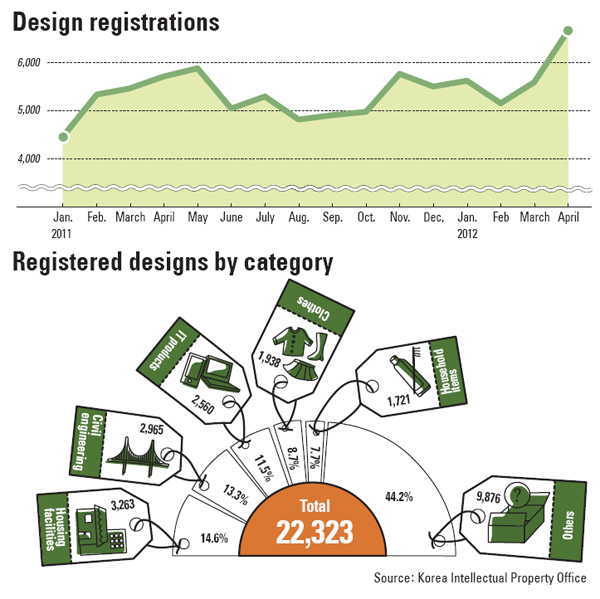 Up-and-coming independent designers and major department stores alike struggle with customers who purchase their most impressive “new arrivals,” rip them apart to see how they’re made, and then return them days later for a refund. Meanwhile, a factory in Korea or China churns out the fakes.

According to a spokesman of a major department store, the design thieves normally appear twice a year, when fashion labels stock their shelves with new arrivals. The fakes are most common in garments, but also in bags and shoes, he said.

“Experienced sales managers of shops just know when they encounter customers who are buying stuff to copy the designs,” he said. “But there is nothing you can do to stop them from making a legitimate purchase and returning the goods within the one-week return period.”

In extreme cases, the garments that are returned were very poorly put back together after being ripped apart to study the designs. “The thieves purchase new clothes, tear them apart to see the patterns inside and put them back together to return,” he said. “It’s just outrageous.”

The most common thefts are Korean brands for young women, not the luxury labels from foreign fashion houses. “Normally the copies are sold through Dongdaemun market and Internet shopping malls,” he said. “We feel frustrated because there is little we can do to stop them.”

Olivia Han, a spokeswoman for the Galleria Department Store chain, said her company doesn’t have a manual to train its employees to spot the thieves. But there are obvious clues.

“Customers who are buying goods to copy the designs often buy stuff without trying it on,” Han said. “They don’t bother with reward programs from the department stores even though they’re spending large sums of money. And the thieves tend to be women in their mid-30s wearing hats or sunglasses.”

She said design thievery has expanded into China since fashion items worn by Korean celebrities have become popular there.

“Some Chinese customers take pictures of the fashion items with their cell phones,” she said. “We try to stop them from taking pictures, but they started taking the photos inside the fitting rooms. So we hung signs in the fitting rooms saying picture-taking is prohibited.”

Under the Design Protection Act, designers can register their designs to protect their intellectual property rights, but the system has its limits. “Registering designs is a complicated legal process,” said Cho Yun-hee, an official with the Intellectual Property Right Protection Center of the Korean Apparel Industry Association. “And there is a grey area in determining whether a design is copied or not.”

According to Cho, pressing charges against the producers of fake luxury goods is relatively easy because the Trademark Act is more definite. “But it’s hard to say for sure whether a design, or a part of a design, is copied or not,” she said.

Dylan Ryu, who is a handbag designer for her label, History, said she has run into several copies of her handmade, one-of-a-kind bags, but she has never taken any to court.

“I found an Internet site selling cheap replicas of my bags,” Ryu said. “And more brazenly, the vendor used photos of my original bags from my Web site to promote her products.”

Ryu took matters into her own hands. “I sent an e-mail complaining that she was violating my design rights,” Ryu says. “I told her to stop selling the imitations of my designs and asked her to post an apology on the site for one month. I did it myself instead of going to court because a legal battle requires so much resources and energy. Fortunately, she complied.”

Cho of the Korean Apparel Industry Association says an increasing number of designers are asking the association how to combat design thefts. “We receive more than 30 reports from designers every month,” she said. “In one year, we had more than 500 cases.”

The association provides legal counseling to the designers. “We send a warning on behalf of them as a first step,” she said. “Then most stores or Internet sites remove the copied products. If that doesn’t work, we assist the designers to actually file petitions to the authorities.”

The first step, according to Cho, is registering original designs with the Korea Intellectual Property Office. According to the office, the number of registrations for design rights has been rising as designers became increasingly aware of rip-offs. In 2006, 51,039 registrations were made with the office for design rights, which grew to 57,903 in 2009 and 63,153 last year.

While larger fashion companies are able to go after design thefts more easily because they register their designs with the Korea Intellectual property Office, young, independent designers still struggle with the process because it’s complicated and costly.

Kim, the shoe designer for Starlet Ash, says she knows a system exists to protect her design rights, but it’s not so simple.

“For each season, I design a dozen pairs of shoes,” she says. “And that means I have to register every single one of those designs. I have to hire a patent lawyer. And each registration costs up to 1 million won. You do the math.”