Choi picks up a victory in Jeonbuk comeback

Choi picks up a victory in Jeonbuk comeback 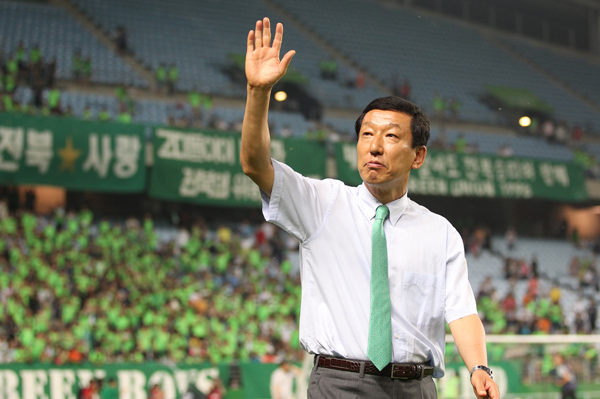 The Jeonbuk Motors celebrated the comeback of former national manager Choi Kang-hee with a 4-0 thrashing of Gyeongnam FC on Sunday, its first victory in three games.

Kevin Oris and Lee Dong-gook netted twice at Jeonju World Cup Stadium, the first homecoming match for Choi. The 54-year-old coach returned to the Motors’ helm after a 575-day absence, during which he led Korea to its eighth successive World Cup berth.

“I am thankful to the fans for waiting for me,” said Choi, who coached the Motors beginning in the 2005 season. To show his gratitude, Choi distributed 1,000 Motors jerseys, purchased at his own expense, to fans at Jeonju World Cup Stadium.

“It was not satisfactory in the first half, but we took advantage of chances and could win,” Choi said. Oris put the Motors on the scoreboard in the first-half injury time and the Belgian striker doubled the lead in the 56th minute. Lee made it 3-0 with his 69th-minute effort, before sealing the victory with a 74th-minute goal.

“It is fortunate to win in my comeback match,” Choi said.

Jeonbuk, which fell as low as eighth place this season, rose to fifth place. Sunday’s victory snapped a two-game losing streak, in which it allowed nine goals. Jeonbuk’s momentum will be tested tomorrow when it hosts the Seongnam Chunma, which won three times and drew once in its most recent four games. The early match of the season between Jeonbuk and Seongnam in April ended in a 2-1 loss for Jeonbuk.

“It won’t be easy, but I will try to realign the team,” Choi said.

Lee increased his all-time league career goal-scoring record to 150. He scored six goals in four recent games, including two games before a three-week break for the World Cup qualifiers.

The 34-year-old striker, who was groomed by Choi at Jeonbuk and the national team, said that Choi’s arrival made an impact immediately.

“He is creating a center in the team and overhauling strategies. I think the players, Koreans and foreigners, are cooperating more with each other under him than then they did before,” Lee said.

Elsewhere on Sunday, Ulsan Hyundai moved within two points of the league-leading Pohang Steelers with a 2-0 victory over FC Seoul at Munsu Stadium.