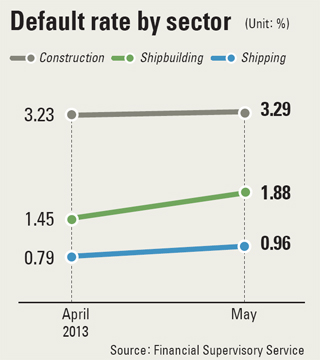 The delinquency rate of won-denominated bank loans increased in May compared to the previous month, the Financial Supervisory Service reported yesterday.

The bad loan rate of 18 banks reached 1.28 percent as of May 31, up 0.03 percentage points from a month earlier. The delinquency rate for corporations in May was 1.48 percent, the same as the previous month, while the household rate was 1.04 percent, up 0.05 percentage point.

“Though banks’ delinquency rate for corporations remained the same as in the previous month at 1.48 percent, the bad loan rate for most sectors except for real estate surged,” said an official from the FSS, noting that industries that have been greatly affected by the sluggish economy.

The FSS official said the surge in the banks’ bad loan rate for the construction, shipbuilding and shipping sectors was mainly due to corporate restructuring at STX Group in which affiliates - including STX Heavy Industries - filed for voluntary debt workout programs.

Concerns have been rising that industries suffering from a lack of cash will be even more negatively affected by external conditions such as the United States’ tapering of quantitative easing. Uncertainty in the global financial market is expected to be a big blow to the local corporate bond market, making it even more difficult for cash-strapped companies to secure liquidity.

“Banks’ financial conditions could deteriorate even further in the future due to an increase in yields after the Federal Reserve’s announcement hinting at a pullback from its quantitative easing measures,” the FSS official said.

Meanwhile, data showed the volume of loans extended by banks as of the end of May was 1,124.6 trillion won ($990.4 billion), up 0.6 percent from the previous month. The value of new household loans surged in May by 2.6 trillion won to 463.2 trillion won.