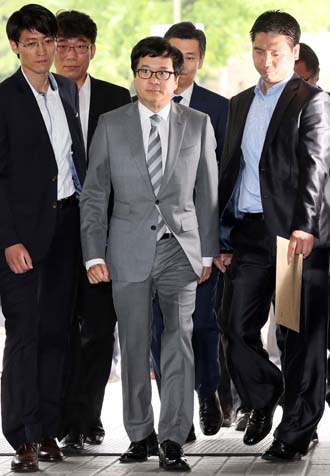 CJ Group Chairman Lee Jay-hyun walks into the Seoul Central District Court in Seocho, southern Seoul, yesterday. The court held a hearing to decide the validity of prosecutors’ request to detain Lee, who has been accused of running slush funds in tax havens, evading taxes and embezzling the conglomerate’s funds. By Kim Kyung-bin

A hearing to decide the validity of prosecutors’ request to detain CJ Group Chairman Lee Jay-hyun, who has been accused of running slush funds in tax havens, evading taxes and embezzling the conglomerate’s funds, was held yesterday.

According to the Seoul Central District Court, Lee, chief of the country’s 14th-largest conglomerate, appeared before the court in Seocho-dong, southern Seoul, at 10:50 a.m. He was surrounded by about 100 reporters but remained silent when they asked whether he admitted to the charges of embezzlement, tax evasion and breach of trust.

After letting the media take his picture in front of the court building, he said, “I will sincerely participate in the session,” and went into court room No. 319.

The session, led by senior judge Kim Woo-soo of the central district court, started at 11 a.m. and continued for about two and a half hours.

Lee was sent to the Seoul Central District Prosecutors’ Office and waited until the court made a decision. Sources at the court said that the decision was likely to be made after 10 p.m. yesterday.

If the court accepts the prosecution’s request, Lee will be the first chaebol chief detained under the Park Geun-hye administration.

The prosecution believes that Lee has allegedly dodged 60 billion to 70 billion won ($52 million to $60.6 million) in taxes by creating slush funds through shell companies established in the British Virgin Islands, including Chishan Development and Topridge, and also embezzled about 80 billion won of CJ CheilJedang money since 1998 by creating fake records of phony transactions between branches in Singapore and Hong Kong and the conglomerate headquarters in Korea.

Lee is also suspected of costing the company 35 billion won in losses by putting up a building that was owned by the company’s Japan office as collateral to borrow about 44 billion won from Shinhan Bank’s Tokyo branch to purchase two buildings in Tokyo’s Akasaka neighborhood.

The special investigation unit II of the central district prosecutors’ office sought a warrant to arrest Lee on Wednesday, about a month after they raided the group’s headquarters and affiliated companies and residences of some high-ranking officials of the group on May 21.

Sources in the court told the JoongAng Ilbo that Lee’s defense counsel from the high-profile law firm Kim & Chang told the court it was unnecessary to detain Lee because there is no concern that he will flee or destroy evidence.

The prosecution wants to detain Lee for its investigation on the allegation that Lee has sent assets abroad. It believes that Lee has purchased about 300 works of art under the names of dozens of CJ employees since 2005 from Hong Song-won, head of Gallery Seomi in Cheongdam-dong, southern Seoul.

Under the law, a person who sends abroad assets of more than 5 billion won is subject to life imprisonment or at least 10 years in prison.