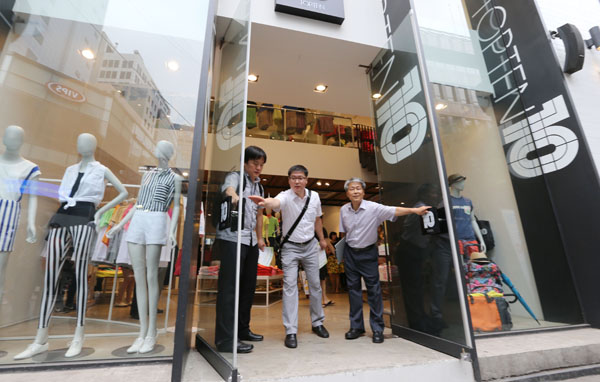 An inspection team yesterday attempts to close the doors of a clothing shop in Myeong-dong, central Seoul, that was using air conditioning. A regulation that fines businesses that waste energy took effect yesterday. By Kim Sang-seon

Air-conditioned shops that leave their doors open face up to 3 million won ($2,643) in fines starting from yesterday as the government tries to crack down on energy waste as a possible power shortage looms.

Officials of the Seoul Metropolitan Government and the Ministry of Trade, Industry and Energy yesterday patrolled the densely-populated downtown areas including Myeong-dong in central Seoul, Gangnam District in southern Seoul and the Sinchon and Hongik University neighborhoods in western Seoul.

Aware of the patrols, shopkeepers kept their doors closed. But they complained that the policy was likely to lose them customers.

“In a small store like this, people can rarely see what’s inside if we close the door,” said Kim Il-young who runs a clothing store in Myeong-dong.

Some shops opted to keep their doors open but turn off their air conditioners even though the day’s high reached 32 degrees Celsius (89.6 Fahrenheit).

“I’d rather not use air conditioning and keep the door open,” said Lee Kyung-min, 33, who sells underwear in Myeong-dong. “I realize the workers may suffer a bit but it can’t be helped,” Lee added.

Office buildings are also coming under the government’s watchful eye as the Seoul city government tries to police its minimum indoor temperature of 26 degrees Celsius. Officials yesterday checked the main building of Hyundai Motor Group in Yangjae-dong, southern Seoul, to see if the conglomerate was complying.

The offices were 28.1 degrees Celsius and employees were fanning themselves.

“The days are already really hot but we need to follow the rules,” said Yoon Ju-hyun, a Hyundai employee.

The temperatures at Samsung Electronics headquarter in Seocho District, southern Seoul, was 28.9 degrees Celsius yesterday. The electronics giant plans to give away cooling chair cushions to workers.

The Park Geun-hye administration has announced a series of energy-saving measures ahead of peak demand in the summer in the wake of four nuclear reactors being shut down because of faulty parts and falsified safety certificates.

The Energy Ministry said all government agencies will be required to cut electricity use by as much as 20 percent through the summer and encouraged large power consumers, such as manufacturers and factories, to follow suit.

Households will be given incentives, including cuts in utility bills, if they manage to reduce a significant amount of power consumption, according to the ministry.