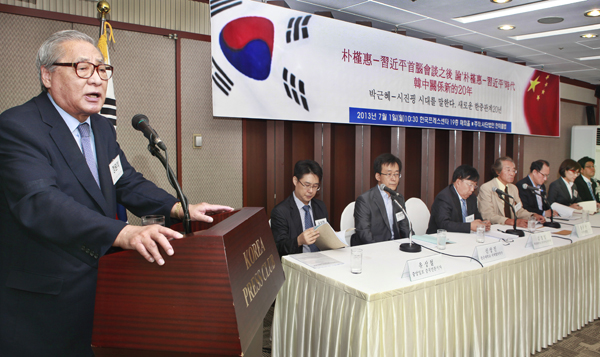 A panel of professors from China and Korea and other analysts discuss North Korea and the development of Beijing-Seoul relations at a seminar hosted by the Korean-American Club at the Korea Press Center in central Seoul, yesterday, just a day after the conclusion of President Park Geun-hye’s first China summit Sunday. The club, a network of journalists with experience as foreign correspondents, celebrates its 10th anniversary this year. By Park Sang-moon

China’s shift in its North Korea policy is opening up chances for dialogue, but the United States also needs to show flexibility, said analysts at a seminar yesterday hosted by the Korean-American Club, an association of foreign correspondents, immediately following the Park Geun-hye and Xi Jinping summit in Beijing.

“The most important factor for the resolving of the North Korean nuclear problem remains the United States,” said Kim Kyung-il, professor at Peking University, one of the key note speakers at the seminar held at the Korea Press Center in central Seoul yesterday.

“The problem cannot get solved with the notion that because the United States can’t change, China has to change,” he said.

And for South Korean-Chinese cooperation to work means not only “requesting North Korea to show its sincerity and to change but to ask the U.S. to do so as well.”

He said the U.S. was in the lead in the North Korea nuclear game, “Because though it appears that North Korea is achieving its goals through its nuclear weapons, it has lost development opportunities over the past 20 years and is losing opportunities in the future as well.”

Some 60 analysts, media leaders and journalists gathered at the seminar entitled “Post-Park Geun-hye and Xi Jinping Summit: Looking Ahead,” hosted by the Korean-American Club.

China thought Pyongyang crossed a “Maginot Line” with its third nuclear test, Kim said, and it will base its North Korea policy on “what is beneficial to China.”

Following North Korea’s third nuclear test in February, relations between Washington, Seoul, Pyongyang and Beijing “resulted in a new concept of South Korea-U.S. and China cooperation to enter into another round in the North Korea nuclear game,” Kim added. But without resolving the North Korean nuclear issue, restoring order in Northeast Asia would be difficult, he said.

Over the past two months, the issue of the denuclearization of North Korea was prominent at three summits: the one in Beijing last week, Park’s meeting with President Barack Obama in May and the meeting between Xi Jinping and Obama last month, said Shin Sang-jin, professor of international relations at Kwangwoon University in Seoul and former Blue House security adviser. The three countries have a united message that the North needs to give up its nuclear weapons.

“Contrary to after the North’s second nuclear test, China made its position on the North’s nuclear problem clear and showed this in action,” he said, “making such cooperation possible.”

“China is switching its policy towards denuclearization on the Korean Peninsula, and it’s emphasizing that North Korea should denuclearize and pressuring it to enter dialogue through the six party talks, especially with the U.S. and the South,” said Shin.

North Korean envoys Vice Marshal Choe Ryong-hae, a top military leader, and First Vice Foreign Minister Kim Kye Gwan, conveyed to Beijing leaders last month that denuclearization of the Korean Peninsula was a dying wish of founder Kim Il Sung and his son Kim Jong-il and that Pyongyang was willing to enter various dialogues including the stalled six-party talks with the U.S., Russia, Japan, China and the Koreas.

“Through China’s efforts, the military tension in the Korean peninsula is easing and the chance of resuming the six party talks is getting higher,” said Shin, who thinks talks will happen “not too far down the road.”

Yoo Ho-yeol, North Korea studies professor at Korea University, agreed that China’s attitude towards the North changed recently and said that the statement following Park and Xi’s summit was “stronger” than North Korea would like. He said the term “denuclearization of the Korean Peninsula,” while not the same as South Korea’s “denuclearization of North Korea,” is “a middle ground between the two positions.”