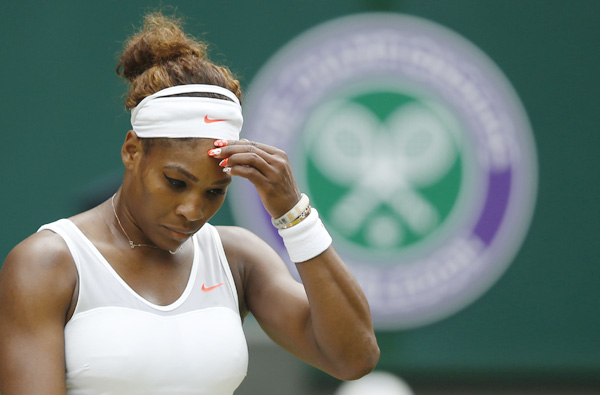 The defending champion and five-time Wimbledon winner failed to close out a see-saw third set Monday, dropping the last four games to Sabine Lisicki of Germany and losing 6-2, 1-6, 6-4 in the fourth round. The result ended Williams’ career-best 34-match winning streak.

It was the latest in a string of improbable exits to jolt the tournament, with defending champion Roger Federer and Rafael Nadal knocked out in the first three days along with Maria Sharapova and Victoria Azarenka.

“I probably couldn’t be more disappointed,” Williams said. “I think I may have backed off of a success. I was playing something successful. I didn’t continue that path. The result didn’t go the way it could have gone had I continued to play the way I did in the second set.”

Her loss left top-ranked Novak Djokovic and No. 2 Andy Murray as the only pre-tournament favorites still standing.

Those two stayed on course for a meeting in the final by winning in straight sets on Centre Court, as Djokovic ousted German veteran Tommy Haas after Murray beat Mikhail Youzhny of Russia. Neither player has dropped a set en route to the quarters.

Williams hadn’t either before this match but after dropping the first against Lisicki, she won nine straight games to take a 3-0 lead in the third. The players then traded breaks to give Williams a 4-2 lead, but the American couldn’t win another game despite having four break points at 4-3.

Lisicki converted her second match point with a forehand winner.

“I’m still shaking,” Lisicki said in a post-match interview, covering her face with her hands to wipe away tears. “I’m just so happy.”

Lisicki reached the semifinals at the All England Club in 2011 but this will rank as her biggest victory at the grass-court Grand Slam. She has eliminated the reigning French Open champion the last four times she played Wimbledon, having missed the tournament in 2010. She ousted Sharapova in the fourth round last year.

Djokovic reached his 17th straight Grand Slam quarterfinal by beating Haas 6-1, 6-4, 7-6 (4). He failed to serve out the match at 5-3 in the third and wasted a match point in the next game before closing out the tiebreaker on his fourth match point.

“I think that I’m playing really, really good tennis at this moment,” Djokovic said. “Maybe even better than back in 2011 when I won this tournament.”

Murray is the only British player left in the tournament, after Laura Robson lost. She couldn’t recover from her missed chances in the first set and fell 7-6 (5), 7-5 to Kaia Kanepi of Estonia, failing to become the first British woman in the quarters of any Grand Slam since 1984. AP