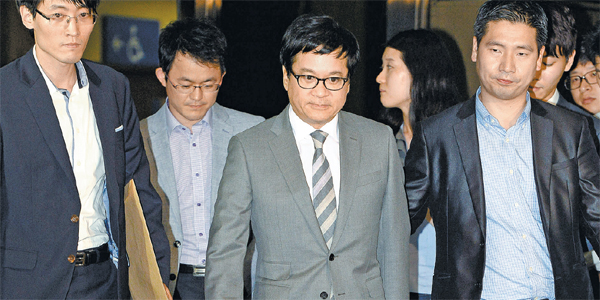 CJ Group Chairman Lee Jay-hyun, center, being arrested late Monday in front of the Seoul Prosecutors’ Office in Seocho District, Gangnam, southern Seoul, after a hearing on the arrest warrant earlier in the day. Lee is accused of numerous malpractices, including running slush funds and tax evasion. [NEWSIS]

A management vacuum has arisen at CJ Group after the arrest of group Chairman Lee Jay-hyun late Monday.

After a court accepted the prosecutors’ request to arrest Lee for running slush funds in tax havens, evading taxes and embezzling the conglomerate’s funds, he became the first chaebol chief detained under the Park Geun-hye administration.

The Seoul Central District Court issued a warrant to arrest Lee, chief of the country’s 14th-largest conglomerate, around 10 p.m., about eight hours after it held a two-and-a-half-hour hearing in the court in Seocho-dong, southern Seoul.

Lee attended the hearing and then went to the Seoul Central District Prosecutors’ Office to await the court’s decision. He was arrested there and was sent to the Seoul Detention Center on the southern outskirts of the city at around 10:55 p.m.

“I sincerely apologize to the nation for everything,” Lee said.

“There is concern that he might flee or destroy evidence,” senior judge Lee Woo-soo told reporters, explaining the arrest.

“This is the biggest crisis in 60 years, since CJ Group’s mother company CJ CheilJedang was established in 1953,” said a CJ Group official.

“Unlike in the past, the absence of the CEO is not regarded as the loss of leadership, but rather the withdrawal of risks related to the owner,” said an analysts at Daewoo Securities. “And management will be decentralized.” Shares of CJ Group have climbed for six consecutive days since June 26 throughout the drumbeat of bad news about Lee.

CJ Group is already experiencing overseas business setbacks. CJ CheilJedang suspended negotiations to acquire a Chinese company to become the No.1 producer of lysine, which is used in animal feed, in the world.

In addition, other negotiations by CJ CheilJedang in China and Vietnam have been stalled.

CJ Freshway deferred the acquisition of a Vietnamese distribution company with a U.S. partner.

CJ Group has been preparing an emergency management system since May, which it disclosed yesterday.

Chairman Sohn is the brother of Sohn Bok-nam, Chairman Lee’s mother, who exerts a powerful influence in the group.

Lee Mie-kyung, who heads the entertainment business of the conglomerate, is the older sister of Chairman Lee.

Meanwhile, the arrest of Lee is expected to alarm other conglomerate families.

Analysts say that under the Park Geun-hye government the punishment for illegal business practices by heads of major conglomerates will likely get tougher in-line with her so-called “economic democratization” slogan, which champions small and medium sized companies.

In the past, the owners of conglomerates were granted suspended sentences for similar crimes.

“In the past, courts tended to overlook crimes or reduce the sentences for chairmen of large conglomerates,” said a research fellow at LG Economic Research Institute. “With the notion of economic democratization, punishments of owners of large companies will be strengthened.”