Although Korean automakers’ domestic sales shrunk in the first half of the year, sport utility vehicles sales burned rubber thanks to the rising popularity of leisure activities and camping.

The combined domestic sales of five local automakers - Hyundai, Kia, GM Korea, Ssangyong and Renault Samsung - in the first half reached 672,813 units, down 2.7 percent from a year ago. However, sales of SUVs jumped 18.9 percent with 167,162 units sold in the January-June period.

Industry analysts said the popularity of SUVs was well demonstrated by the performance of Ssangyong Motor, which specializes in SUVs. It had a 34.1 percent on-year increase in domestic sales.

In fact, Ssangyong, now controlled by India’s Mahindra Group, is the only automaker to report a domestic sales increase. Its SUV sales in the January-June period were 22,359 units, up 14.2 percent from a year ago, thanks to its Korando models. SUVs and minivans account for more than 90 percent of its sales. It was a very good first half for minivans after a new model , Korando Turismo was introduced. Sales increased from five units to 5,275, a 105,400 percent increase. 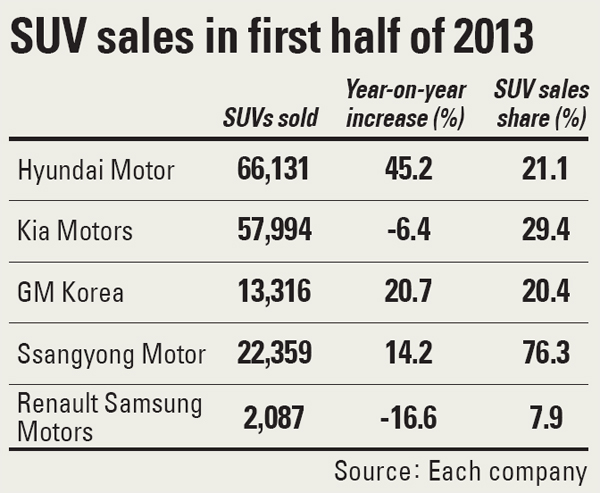 Hyundai said it consciously tried to keep the SUV trend going by introducing the seven-seater Maxcruz and a facelifted Tucson.

In contrast, its affiliate Kia Motors saw a 6.4 percent on-year decrease in SUV sales after it released no new SUV models. However, the nation’s second largest automaker said that sales of the Carnival minivan have been rising after 3,147 units were sold in June, which was the highest sales since last June.

GM Korea, the Korean unit of the United States automaker General Motors, sold 13,316 SUVs in this first half, up 20.7 percent from a year earlier. The country’s third largest automaker released the Chevrolet Trax, a small SUV.

Renault Samsung Motors, which has only one SUV in its lineup, said its QM5 sales in the first half dropped 16.6 percent on-year to 2,087 units. However, QM5 sales in June increased 35.8 percent from May.

The Korean unit of French automaker Renault said SUV sales will bounce back in the second half when it releases QM3, a small SUV that is also known as Renault Captur.

The popularity of SUVs is also seen in the used car market. According to data from SK Encar, the nation’s largest used car dealer, half of the 10 fastest-selling used car models from its stock in the past two months were SUVs.