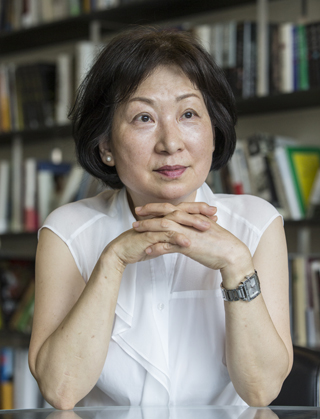 In February, a group of students from Yale University received a lot of attention for their submission of a petition requesting that the Ivy League university establish a major in Korean studies.

They said Harvard, Columbia and other top universities offer Korean studies, in which students learn about and research the country and its history, language and society.

“I feel the same way as the students,” said Kim Seung-ja, a 61-year-old Yale professor in an interview with the JoongAng Sunday. Kim teaches Korean language and is Yale’s director of East Asian language instruction.

Over the course of a week, about 200 students gathered signatures for the petition. Though the idea itself came from students with some Korean background, others from the United States, Europe, Central America and Southeast Asia lent support.

“The alma mater of three of the most recent U.S. presidents [George W. Bush, Bill Clinton and George H. W. Bush] is Yale University,” Kim said. “Our school has been a cradle for many American leaders. It is necessary that we teach Korean history to [students] that will be leading the United States in the future.”

“At Yale, there is a strong academic tradition of East Asian studies,” Kim said. “We had [scholars like] John Hall in the field of Japanese studies and Jonathan Spence of Chinese studies.”

Yale University opened its first Chinese language course in 1943 at the request of the U.S. government. Several years later it established the Institute of Far Eastern Languages so members of the American military, diplomats and missionaries would be able to learn the languages of Korea, China and Japan.

However, Korean language courses ended in 1961 and did not resume until 1990.

“These days, East Asian studies is receiving much attention and support in academia as a whole, rather than Korean, Japanese and Chinese studies separately,” Kim said. “As for Yale University, however, there is concern about an imbalance when it comes to research on East Asian studies because Korean studies is not offered.”

Kim added that opening a Korean studies course would be an investment not only for students majoring in the subject, but for Korea itself.

“Many Korean institutions and companies have recently been supporting research on regional studies, such as on China and Southeast Asia,” Kim said. “I do hope that [the school] looks further into the future rather than only looking at areas of studies that bring immediate results.”

Kim is a living witness to how Korean studies has been received in the United States over time.

From 1987 to 1990, Kim was an instructor at Harvard University’s Department of East Asian Languages and Civilizations and returned to her alma mater, Yale, in 1990 at the request of her former teacher, Professor Samuel Martin. It was Martin who came up with the so-called Yale romanization system for Korean in the 1950s.

After she returned to Yale, with much effort on the part of the Korean-American Students at Yale (Kasy), the school revived courses on Korean studies for the first time in 29 years.

“I still remember the first class,” Kim said. “The classroom was crowded with more than 80 students and I was very much moved.”

American media back then, including the New York Times, provided coverage of Kim teaching Korean studies at Yale, but the attention soon waned.

Kim recalled that when schools in the United States were asked to establish Korean studies courses or majors, many people opposed the idea, saying “there is no need to waste money on things that are not needed.”

“There were even some American professors asking why students needed to learn about Korean studies if all of the culture of Korea originates from China,” Kim said.

According to Professor Kim, Korea began to regain attention in the United States about the time it hosted the 1988 Seoul Olympics. Gradually, Korean studies, too, started receiving attention from scholars as Korea started to grow again economically after the 1997-98 Asian financial crisis.

“From 2002, there were an increasing number of non-Korean students attending class to learn basic Korean language,” Kim said. “Before that year, there were less than 10 students in the class, but the number increased to over 20 and the class had to be split into two.”

Hallyu, or the Korean wave, contributed to the popularity. Currently, there are about 90 universities and 60 high schools in the United States that teach Korean language.

“There are American students who know the names of K-pop stars whom I myself have not heard of,” Kim said. “Chinese and Southeast Asian students say that they registered for the course after watching Korean dramas.”