NLL records to be forced open

NLL records to be forced open 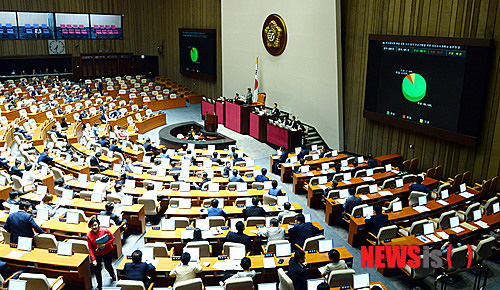 Ruling and opposition lawmakers passed a bill calling for the presidential records of a conversation between the leaders of South and North Korea at a 2007 summit in Pyongyang to be opened to lawmakers.

At a plenary session of the National Assembly yesterday, 257 out of the 276 lawmakers attending the session voted for disclosure of the original transcript and other materials regarding the 2007 inter-Korean summit.

Jung Sung-ho, an opposition Democratic Party lawmaker, said at the session that the bill calls for disclosing the original transcript of the closed-door meeting between Roh and Kim on Oct. 3, 2007, in Pyongyang, and audio files and other relevant materials as well as records on preparations for the summit.

Under the Act on the Management of the Presidential Archives, opening a presidential record requires approval from more than two-thirds of sitting lawmakers at the 300-member National Assembly.

According to the legal procedures, National Assembly Speaker Kang Chang-hee will have to submit documents on the result of yesterday’s vote to the head of the National Archives, and then choose a way to receive the materials: To read the originals at a certain place designated by the head of the archives or receive copies of them.

If the speaker chooses copies, the head of the archives will select an official who will make the copies and deliver them to lawmakers.

Still, lawmakers are prohibited from divulging the contents to the public by law. If they violate the law, they are subject to a maximum jail term of three years and the stripping of their rights to vote or run in an election for seven years.

In practical terms, however, the lawmakers can divulge part of the materials because they are under the protection of legislators’ immunity from arrest and detention without the consent of the National Assembly.

Before the session, Democratic Party members reached a consensus to support the bill. So did Saenuri Party members.

The vote for disclosure of a presidential record followed the opposition’s suspicion that the transcript declassified by the National Intelligence Service was altered by it.

The Roh administration made a copy of the transcript of the closed-door meeting and gave the original to the National Archives of Korea and the copy to the NIS.

According to the transcript declassified by the NIS, Roh said the NLL “should be changed” and it had “no legal or logical basis.” But he followed that by saying the border “is actually effective.”