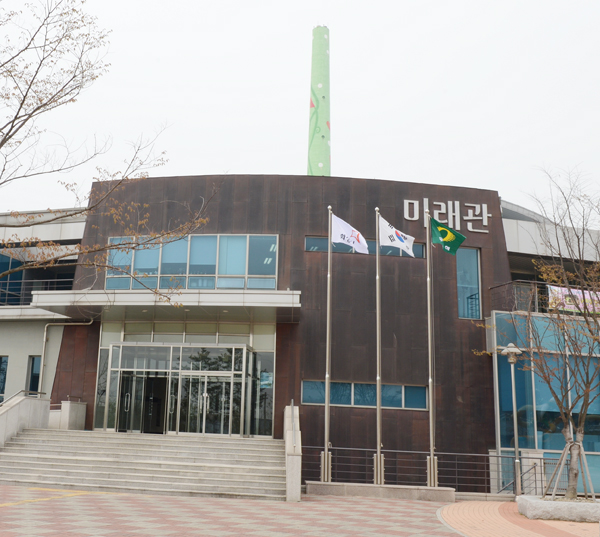 The Green Environment Center in Hwaseong, Gyeonggi. Provided by the center

HWASEONG, Gyeonggi - The villages of Hwaseong, in Gyeonggi, are outdoing each other to promote their attractions. If you drive through the area, you spot signs reading, “Just 30 minutes from Gunpo, Euiwang and Siheung via either national highways or expressways,” or “A site close to beautiful Hwaseong Lake.”

They’re each competing to be the home of a crematory the Hwaseong city government plans to build by 2018.

In May, eight cities in Gyeonggi - Hwaseong, Bucheon, Anyang, Pyeongtaek, Siheung, Gunpo, Euiwang and Gwacheon - confirmed they would come together to build a large crematory by 2018 on a 300,000-square-meter (74.1-acre) plot of land with an investment of 120 billion won ($105.8 million).

Hwaseong agreed to provide the land for the project - it’s the city with the most land - and the other seven will share 98 billion won of the total cost. The central government and Gyeonggi provincial government will pay 22 billion won. It’s tentatively named the Hwaseong Crematorium Complex.

The cities need their own crematory because facilities in Suwon, Seongnam and Yongin can no longer keep up with demand as cremations become more popular in Korea. The Hwaseong city government estimates that an average of about 4,000 to 7,000 corpses are sent each year to facilities outside Gyeonggi, including Seoul, Incheon and South Chungcheong. Families using crematories outside Gyeonggi have to pay extra money and have difficulty securing reservations.

Many cities in Gyeonggi, including Ansan, Pocheon, Icheon, and Gimpo, have considered building crematories but abandoned plans after facing strong opposition from their local residents.

“I felt like I received applications from large conglomerates,” an official of the Hwaseong city government told the JoongAng Ilbo. “To be a candidate city, more than 70 percent of a village should agree with the project. For this crematory, more than 80 percent of the residents in each village supported the plan.”

Most of residents of the six candidate villages are farmers and think the crematory could do wonders for their home towns. The city government has pledged to choose the village in October and give it at least 30 billion won of the total investment. It is expected about 30 to 40 new jobs managing the facility will be created.

“We think our local economy could be boosted because we will have more visitors,” said Jeong Yong-rak, 60, head of the Seosin-myeon committee.

The Green Environment Center, a garbage incineration plant that was opened in Hwaseong’s Bongdam-eup village in August 2010, came with an indoor swimming pool and a fitness center.

The villages expect similar facilities to accompany the crematory. “I think the Green Environment Center positively impacted the citizens in their thinking about unpleasant facilities like a crematory,” said Lee Seok-yeon, head of Bongdam-eup village.