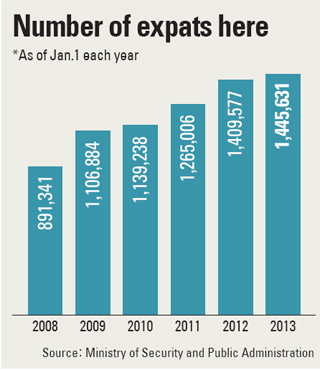 The 1.44 million includes naturalized Korean citizens, long-term expats and children of foreigners in the country.

According to the Ministry of Security and Public Administration, which first started the study into the number of expats in 2006, the growth rate in the number of foreigners has dropped to 2.8 percent this year because of an expiration of a five-year working visa program, which prompted many overseas workers to depart the country, that ended last year.

A large share of the foreigners were ethnic Koreans in China whose H-2 visas expired. The government agency estimated about 72,000 ethnic Koreans from China came to the country in 2007 to find jobs.

“Since we started looking into the number of expats in 2006, the figure increased by more than 20 percent each year until it dropped to 2.9 percent in growth rate in 2010 due to the global economic downturn,” said the ministry.

“The growth rate then resumed its pace in 2011, when it recorded an 11 percent increase in the number before the end of the five-year employment visa program in 2012.”

Chinese nationals, including ethnic Koreans, account for more than half of the number of expats with 775,474, or 53.7 percent, of the total figure.

Foreigners who are in Korea for work comprise 36 percent of the total number of expats with 520,906, while 147,591 reside in the country because they are married to Koreans, accounting for 10.2 percent of the 1.44 million figure.

Foreign students in the country number 83,484.

“Because of the concentration of universities and companies to work for, 63.1 percent of the foreigners live in Seoul, Incheon and surrounding areas in Gyeonggi,” the ministry said.

The number of districts in the country that have more than 10,000 foreigners this year stands at 44 this year, a significant rise from eight districts in 2006.

Gyeonggi’s Ansan is found to have the most number of expats with 64,709 foreigners, comprising 9 percent of the city’s population, followed by Seoul’s Yeongdeungpo District with 53,666 and Guro District’s 41,622.

Meanwhile, the report from Statistics Korea also revealed that Koreans in their 20s were the most active international travelers last year. About 482,000 twentysomethings went abroad in 2012, accounting for around 38 percent of the total number of Koreans who traveled around.