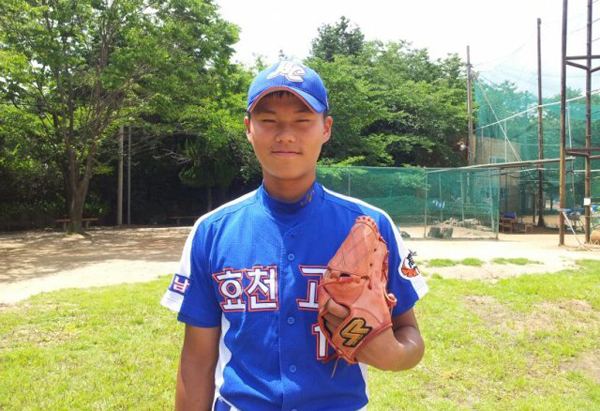 The Kia Tigers drafted a teenage pitcher from a little-known high school in South Jeolla on Monday, a surprising move that bucks the trend of deepening elitism in the Korean professional baseball world.

The Korea Baseball Organization has revived a region-based drafting system for the first time in four years, but all the eight players picked up were from elite baseball schools. All, that is, except Cha Myung-jin of Hyocheon High School in Suncheon.

The system gives each club the right to draft a player or two from a high school or a college in its city before all amateur players become available to all clubs through the regular drafting system scheduled for August.

Eight teams selected a player each from their home regions on Monday. Seven were high schoolers. The remaining two teams - the NC Dinos, who debuted this year, and the KT Wiz, who will debut in 2015 - will pick two players each this coming Monday.

The majority of students picked were from high schools well known for their baseball programs such as Sangwon in Daegu, Duksoo in Seoul, Kyungnam in Busan and Dongsan in Incheon.

But the Tigers, whose league-best 10 championships were led by graduates of strong high school programs in Gwangju such as Gwangju Jeil, Dongsung and Jinheung, chose Hyocheon over those well-known schools.

“Hyocheon isn’t the kind of big city-based, prestigious team that professional teams normally go for,” said Seo Chang-gi, the manager of the school’s team. “It is true that Cha Myung-jin is talented, but I thought Kia would pick from a university or another high school rather than from us.”

He’s not the first player from Hyocheon to make it to the KBO. There are a handful of pros from the school, such as Lee Seong-yeol, a Nexen Heroes outfielder, and Jin Myung-ho, a pitcher for the Lotte Giants.

The school could have produced many more, the coach says. Many talented students in nearby middle schools are leaving Suncheon to get on prestigious teams in big cities, he said. “Just two years ago, there were only 20 players on our team,” Seo said.

“Parents believe that their chance of sending their kids to a national competition gets higher if they enroll them in a prestigious high school.

“They believe that being on a prestigious team helps draw attention from professional team scouts.”

Cha said his parents are having a hard time supporting him. “Some of my friends gave up baseball because they don’t have the money,” he said. “It takes money to play baseball.”

Seo said he knows talented players who are too poor to continue playing. “Sports are no longer the last resort for success for poor people,” he said.