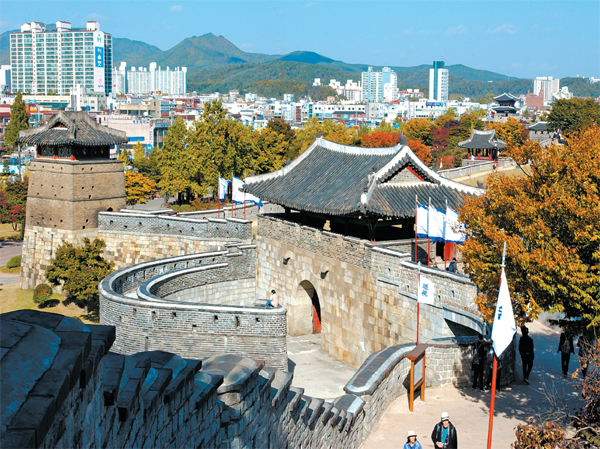 Hwaseong Fortress in Suwon, Gyeonggi is Korea’s Historic Site No. 3 and has had Samsung Electronics as its sponsor since 2005. Korean corporations are helping to preserve the country’s cultural heritage sites. [JoongAng Ilbo]

In a bid to brush up their public image, Korea’s companies have been playing guardian angel to the country’s cultural properties.

It was eight years ago that the Cultural Heritage Administration introduced its “One Protector for One Cultural Property” program, a volunteer system in which a corporation, a school, a family or an individual can choose a cultural property and help with its preservation and maintenance.

According to the CHA, some 3,100 cultural properties in Korea have “protectors,” with a total of 74,049 people or organizations signed up to help. Of those, 45 are corporations that have signed agreements with the CHA.

As the mass media increasingly portrays business conglomerates as monster-like entities only interested in making money, more and more conglomerates have taken an interest in social responsibility. Working to protect cultural properties is one of the ways they share their profits with the community.

Some companies choose sites simply based on geographic proximity. Others use their areas of expertise to help with a particular aspect of the preservation process. Some firms have chosen cultural properties that are somehow related to their corporate values.

In the past, the government was responsible for the preservation and maintenance of the country’s heritage sites, but as businesses and individuals have begun to share that duty, a new whole way of safeguarding traditional culture has emerged.

“As companies, local governments and civic groups get involved, more and more Koreans are taking an interest in cultural properties,” said Jang Yeong-ki, a government-public cooperation specialist at the CHA. “What’s more notable is that with the companies’ manpower, technology and financial support, their involvement has actually led to tangible results.”

The role of cultural guardian provides dividends in the form of an improved image.

“It’s killing two birds with one stone,” said an official at one firm’s social contribution team. “The level of companies’ social contributions has been upgraded and the scope has broadened as well. Needless to say, the corporate image gets better.”

Hwaseong Fortress in Suwon, Gyeonggi has as its protector one of the most powerful corporations in Korea and the world - Samsung Electronics.

It’s a 5.52-kilometer (3.4-mile) long fort that encompasses a palace and other supporting structures. Constructed between 1794 and 1796, it’s a Unesco Cultural Heritage Site and Korea’s Historic Site No. 3.

The structure is a tribute, with a story of dramatic royal intrigue built-in. Its construction was led by King Jeongjo (1752-1800), one of the Joseon Dynasty’s most respected kings, who had a soft spot for his dad. His father, Crown Prince Sado (1735-1762), had died of hunger and thirst after being locked in a rice chest for eight days on the order of his own father, King Yeongjo (1694-1776).

After taking the throne, Jeongjo moved his father’s tomb from Yangju, Gyeonggi to Suwon and built the fortress in his honor. Historians say that Hwaseong represents King Jeongjo’s love for Sado, as well as his vision of ushering in a new era away from Seoul, where he was besieged by political opponents.

Samsung Electronics - which has offices in Suwon called Samsung Digital City - signed an agreement with the Cultural Heritage Administration in April 2005. Local employees have been volunteering to take care of the historic site since. So far, some 410 Samsung workers have changed the changhoji (traditional Korean paper made from mulberry bark) on the doors and windows, and helped with other maintenance chores.

“I’ve been helping take care of Hwaseong for five years,” said Park Heong-seop of Samsung’s printing business department. “It’s a rewarding experience to be able to protect and promote our beautiful and proud heritage.”

In addition, 230 Samsung employees have been working as guides for visitors from abroad since 2007. After receiving a formal education on the fortress, they explain its historic importance to the some-300,000 foreigners who visit every year.

“We will continue to guard Hwaseong in the belief that our work can increase people’s interest and love for the fortress and its history,” said Han Min-ho, senior vice president at Samsung and head of the Suwon social volunteer team.

1. Employees of Samsung Electronics repair old windows and doors at Hwaseong Fortress. 2. A new signboard at the tomb of Kim Jeong-hee designed by Amore Pacific Corporation.

Amore Pacific Corporation - one of Korea’s major cosmetics firms - has not only been working to make people more beautiful, but also the country’s cultural properties.

It signed on to the “One Protector for One Cultural Property” program in 2006 and chose historic sites related to renowned Joseon-era scholar, poet, painter and calligrapher Kim Jeong-hee (1786-1856) such as his house, his home in exile and his tomb.

Kim has left many drawings, poems and writings that are highly regarded by scholars not just in Korea but also in China and Japan. He is famous for his 1844 painting “Sehando” (meaning a winter scene), which portrays a bleak, minimalist landscape, as well as the Chusa Font that he developed and gave his pen name.

Amore Pacific has been redoing the signboards at the sites. In September of last year, the company installed new signboards at Kim’s house and tomb and a pine tree in Yesan, South Chungcheong, where he was born and raised. The design process took the company six months.

The new signboards are simple, using dark gray slate so they blend in with the surroundings. To increase their durability, the company used a type of material called duralumin, a strong, hard, lightweight alloy of aluminum widely used in aircraft construction.

At the bottom is a pattern inspired by spreading ink that is meant to reflect how his scholarly reputation stretched beyond the country’s borders. Amore also simplified the language so even those with only a rudimentary knowledge of history can understand what’s being explained.

Meanwhile, Posco - Korea’s largest steelmaker - shared its knowledge of making things sturdy in the restoration of Sungnyemun, Korea’s National Treasure No. 1, which burned down in an arson attack five years ago.

Posco joined the protector program in 2005. Two years after the fire, the company signed an agreement with the CHA to help with the traditional production of steel. The key in the restoration of Sungnyemun was that much of the process was done the old way.

The company provided 10 tons of iron ore and 300 million won ($262,295) to build a workshop for the artisans. The funds also allowed the artisans to study the traditional steelmaking process.

“Thanks to Posco, we were able to restore Sungnyemun the traditional way,” said Im Eun-kyeong, an official at the CHA’s Sungnyemun restoration team. “It’s also meaningful how Posco, which advanced Korea’s steel industry, helped make the steel for Sungnyemun.” 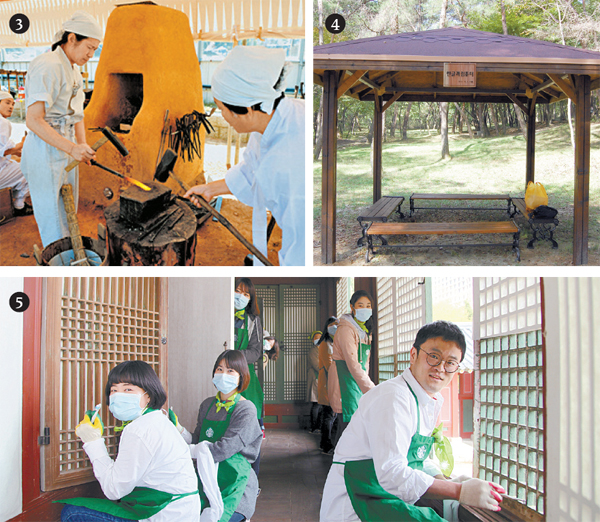 3. The workshop made for manufacturing steel the traditional way that was set up for the restoration of Sungnyemun and paid for by Posco. 4. Hancom has built a pavilion at the tomb of King Sejong so visitors can take a break out of the sun. 5. Starbucks employees have been working on preserving and promoting Deoksu Palace, where King Gojong is believed to have enjoyed coffee as the first Joseon king to taste the beverage.

King Gojong (1852-1919) is believed to be the first Joseon king to taste coffee and to have developed a fondness for it. Historians say he first tasted the beverage while taking refuge from the Japanese in the Russian legation in 1896.

After that incident, Gojong settled at Deoksu Palace in central Seoul instead of Gyeongbok or Changdeok palace, which were traditionally used as the main residences of the Joseon kings.

At Deoksugung, which has two Western-style buildings called Seokjojeon and Jeonggwanheon, King Gojong is thought to have continued sipping java. One rumor has it that the Japanese murdered him by putting poison in his coffee.

As part of the cultural asset protection program, Starbucks has been working with the CHA in running nighttime cultural programs at Deoksu Palace since 2009. Every fall and summer, when the nights are most pleasant, Starbucks and CHA invite notable figures from the cultural world to give lectures at Jeonggwanheon. So far some 30 lecturers have spoken to around 6,000 visitors.

In addition, Starbucks has also helped with cleaning, weeding and creating flower beds at the palace.

Software company Hancom’s name is a portmanteau of hangul (the Korean alphabet) and computer. Its most famous creation is the Hangul word processing program that’s an alternative to Microsoft Word and is used by Korean government agencies.

Hancom also participates in the program. Appropriately, employees of the company in 2011 paid a visit to the tomb of King Sejong (1392-1450), who invented hangul in 1446 and gave Koreans their own writing system so they no longer had to rely on Chinese characters.

They replaced aging changhoji, cleaned up the area and helped with other such tasks. The employees also built a pavilion with company money so visitors can rest in the shade. A wooden signboard on the pavilion says “Hangul and Computer,” the company’s full name.