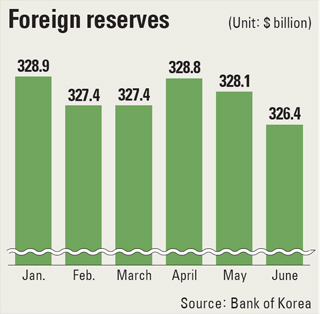 Korea’s foreign reserves have fallen to the lowest level in seven months and the drop was the sharpest in 13 months.

According to the Bank of Korea (BOK) yesterday, Korea’s foreign reserves stood at $326.4 billion as of June 30, which is $1.6 billion less than the previous month.

The last time foreign reserves fell so much month-on-month was in May 2012, when they plummeted $5.9 billion. It was the second consecutive month of decline.

The central bank attributed the June drop to payment of a $1 billion foreign exchange stabilization bond issued in 2003.

“Because another foreign exchange stabilization bond is possible, the drop can be seen as temporary,” said a BOK official.

Recently the U.S. dollar has been gaining strengthen against major currencies after Federal Reserve Chairman Ben S. Bernanke indicated the U.S. central bank may start reducing its bond purchases later this year and end its stimulus program by mid-2014.

While securities holdings were $4.2 billion less than the previous month, deposits rose $2.4 billion and the IMF reserve position increased by $120 million. Special drawing rights and gold were unchanged. The central bank has not increased its gold bullion since February.

Since the first financial crisis with only $20 billion in the central bank’s vault in December 1997, the Korean central bank has been aggressively expanding its foreign reserves to cushion possible volatility that could arise from a sudden mass exodus of foreign investment.

The stability of the Korean financial market was under a similar threat during the global financial crisis in late 2008.

Korea’s foreign reserves exceeded $300 billion for the first time ever in April 2011 and have remained above that level since.

Korea’s foreign reserves hit an all- time high of $328.9 billion in January.