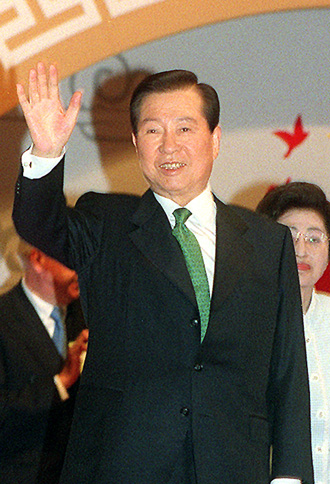 In a symbolic retrial, a Seoul appeals court yesterday acquitted a group of political dissidents, including the late President Kim Dae-jung, of convictions from the 1970s for violating the dictatorial rule of the Park Chung Hee administration.

The late professor Ahn Byung-mu, however, was not acquitted yesterday because his wife, who filed the retrial petition, died during the legal battle.

The families of the 16 democracy fighters, including the late President Kim’s wife Lee Hee-ho, came to the courtroom yesterday to witness the acquittals.

Yesterday’s retrial followed rulings by the Constitutional Court and the Supreme Court earlier this year invalidating the 1975 Emergency Measure 9. The prosecution asked for acquittals for 16 yesterday in a retrial that took just 20 minutes.

With the amending of the constitution in October 1972, Park extended his rule almost indefinitely. Under the “Yushin Constitution,” the strongman promulgated a series of emergency measures designed to quell all opposition to the new constitution and mandating strong punishments for violators.

Emergency Measure 9 was announced on May 13, 1975 and enforced for four years until Park’s assassination on Oct. 26, 1979 and its lifting at the end of that year.

The Park administration said at the time that the measure, which included strong curtailing of freedoms, was necessary for national security while under threat of a North Korean invasion.

“Emergency Measure 9 contained so many problems that it is embarrassing to actually lay them out before the defendants and their families here in this courtroom,” said Judge Lee Kyu-jin, who presided over the case.

“The circumstances of that time period cannot justify its purpose in this retrial.”

The court also said the defendants’ sacrifices and sufferings for human rights was the foundation of Korea’s democracy. “I want to deliver a message that this ruling is an expression of deep apology and respect for them.”

In a rare expression of the judiciary’s respect for the political dissidents, Judge Lee did not leave the bench until the former defendants and their families all left the courtroom.

The dissidents were convicted of drawing up a statement that said Korea’s liberal democracy and the separation of power were destroyed by the dictatorship in February 1976 and reading it at a mass at the Myeongdong Cathedral one month later.

The Supreme Court convicted them the next year and handed down five-year prison terms, which all the dissidents served at least partially.

Surviving family members and some surviving activists filed for a retrial on Oct. 4, 2011 and the Seoul High Court decided in May to allow it.

In March this year, the Constitutional Court ruled that emergency measures 1, 2 and 9 were unconstitutional.