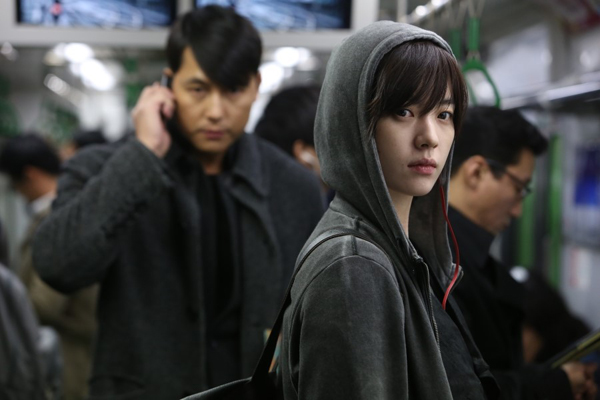 A recent fad of installing black boxes in cars reflects how much modern society has become highly-digitized and network-oriented. Such change allows police investigations in “Cold Eyes” to progress only through surveillance. This action-packed thriller is directed by rather unfamiliar faces in the Korean film industry, Cho Eui-seok and Kim Byung-seo.

A specialized unit in the police department called the “surveillance squad,” including Chief Commander Seol Kyung-gu and newbie Han Hyo-ju, is keeping a watchful eye on a case with no trace of evidence.

Behind this perfect crime is the leader of a criminal organization, James, played by Jung Woo-sung. A breathtaking chase takes place across various locations in Seoul, easily recognizable to the audience. The familiarity contributes to the realism that the directors tried to capture.

Casting is another attention grabber; Seol and Han are the top stars in Chungmuro, a center of the Korean film industry. They are known for their popularity and quality acting. Jung’s first attempt as a bad guy also attracts the interest of the audience.

As a remake of a Hong Kong film, “Eye in the Sky” (2007), the directors had to spend the given running time wisely. More emphasis was placed on action scenes; the unconventional use of long takes on Jung’s wire act, a car chase down the buzzing streets of Teheran, Gangnam, and other suspenseful scenes will provide plenty of entertainment.

The start is promising enough: a thirtysomething woman, working the night shift at a deserted office. Misook (Kim Do-young), a Web toon manager at an Internet portal meets her demise soon enough as a comic from star writer Jiyoon (Lee Si-young) leaps off the screen as Misook’s shady childhood is brought to life. Each comic strip is then enacted in real life, much to the horror of viewers and the victim, who is also the protagonist in the toon.

Soon enough, Misook’s bloody corpse is found the next day, and detectives Gichul (Uhm Ki-joon) and Youngsoo (Hyun Woo) are drawn into the plot.

Suspect No. 1 is the writer, Jiyoon, who is also suffering from hallucinations.

As the plot thickens, more dark characters are introduced and it’s hard to decipher just who is innocent and who isn’t. As more episodes are uploaded, the two policemen scurry to each crime scene, as depicted in the Web toon, always getting there a little too late.

As the two delve deeper into Jiyoon’s past, there are many more surprises along the way and perhaps because of this, toward the end, the story is a bit difficult to buy into. As long as logic is left on the shelf, there is enough to keep the viewers entertained.

Garden of Words (All)

A scenic view with graceful raindrops falling is vivid and lifelike, making the audience wonder whether such beauty can be captured so tangibly in an animation. Director Makoto Shinkai’s realism mesmerizes the audience despite a fairly short running time of 45 minutes.

Takao Akizuki’s dream job is one that no one respects: a shoemaker. He often skips school on rainy days to sketch shoe designs at a nearby park. One day, he meets Yukari Yukino and they grow closer to each other after meeting several more times, even without exchanging many words. As the rainy season comes to an end, their intricate, rather static relationship encounters a change as Akizuki finds out about Yukino’s mysterious identity.

Along with the mastery of realistic portrayal, Shinkai uses the motif of rain to effectively deliver the emotion of the two characters. The peaceful sound and view of rain, as well as the softly narrated words of Takao’s heart contribute to the poetic storytelling of the film. Such subtle elements slowly but surely move the heart of the audience by the end. 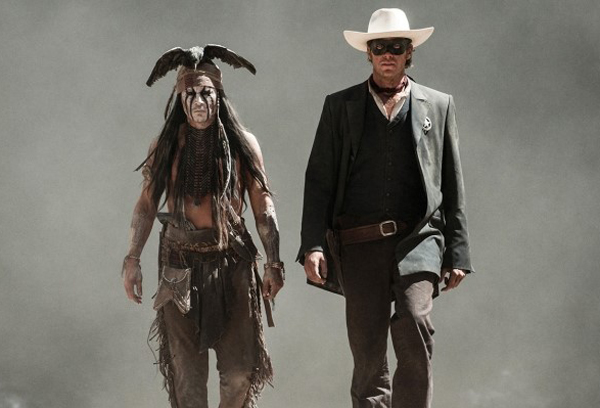 Johnny Depp is back on the big screen in this shoot-‘em-up with a Depp twist.

The poster may have you wondering if he’s channeling Captain Sparrow from the “Pirates of the Caribbean” franchise yet again. And to a certain degree he is. Teaming up with director Gore Verbinski again - they worked on “Pirates” and “Rango” - this time around the duo tells the tale of Native American warrior Tonto (Depp) and educated lawyer, John Reid (Armie Hammer) who meet on a train that’s bringing Reid (Hammer) to his hometown.

And in typical western fashion, the two form an unlikely alliance to take down criminal Butch Cavendish and his gang, who are responsible for killing their loved ones.

The movie is based on a TV show from the ’50s but the outcome is so very different, mostly because of Depp’s quirky rogue Comanche. His character depiction is way off; unlike in the TV show, he has no attachment to any group. And all the while, one wonders why the emphasis is on Tonto when the film is titled “Lone Ranger” - that ranger is supposed to be Reid.

Another point of disgruntlement comes in the length. Two hours and 29 minutes is not a short walk in the park and the fact that it takes the movie nearly towards the end to reach the climax is off-putting.

But Depp fans will no doubt love it as it has that eccentric feel that is quintessentially Depp.