Paris’ enfant terrible seemed to have a point, speaking on the last day of fall-winter shows that have seen spectators transported from apocalyptic opera houses to the circus and flung across the four corners of the globe.

The references merged with theatrical panache to produce once of his best shows in seasons.

But the cinema continued throughout Wednesday. In Valentino’s encyclopedic show, continents and eras were merged and had Baz Luhrmann in delight.

With a delicious purr, Gaultier pounced back into top form with a feisty couture collection, proving that despite a couple of off seasons, he still has a lot of tricks up his embroidered sleeve.

This fall-winter’s muse was the female panther, which inspired a slew of fresh ideas, including plenty of new ways to wear leopard and how to dress in feathers to look like a cat. 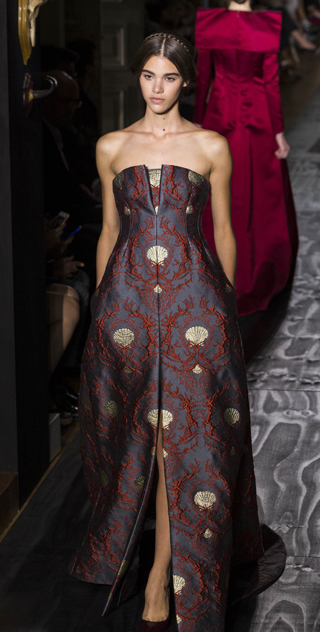 If it sounds eccentric, it was.

Leopard print featured cheekily on tights below one stylish all-black crepe dress, and there were several incredible couture coats. At first glance they looked like fur but were made entirely of feathers, speckled like a big cat pelt and with white feathers at the edges to resemble skin.

Forty-three looks filed by to the infectious theme of “The Pink Panther,” showcased on models who clawed as they walked. Guests looked on from stalls divided into lionesses, panthers, lynx and leopards.

When the first tight gown swept by with the image of orange rhinoceros on 3-D bed of myriad earth brown lacing, apparently inspired by a painting of Elizabeth I, it was clear the show would follow through on the promise.

Designers Maria Grazia Chiuri and Pierpaolo Piccioli, in the process, seemed to have pulled off their most eccentric and imaginative show to date. Oriental motifs and arabesque patterns fused with Scottish herringbone tweeds and Renaissance capes were thrown into the creative cauldron. This appeared alongside embroideries of lion’s heads, bees, beetles and dragonflies, often to luxurious effect.