This summer “Epic” will open up viewers’ eyes to the beauty of nature. Provided by 20th Century Fox

Koreans love a good animation, and even more so if it’s made by homegrown talent.

As 20th Century Fox looks toward the Korean release of “Epic” next month, the film distributor held a press event where two Korean animators Lee Sang-jun and Sung Jee-yun from Blue Sky Studios, as well as voice actors for the dubbed version, Han Seung-yeon and Jung Jin-woon, talked about their input in the film.

Coming all the way from the United States, Lee was the lead character designer and Sung was lighting supervisor on the project, which sees big names likes Beyonce, Amanda Seyfried and Colin Farrell lending their voices.

But behind the Hollywood glitz, both Lee and Sung said that the movie was a labor of love, with Lee professing that his Korean heritage did wonders for the creative process.

Q.What roles do you play as animators?

Lee: To bring the screen to life, I talk with the director to highlight what they want to emphasize. I design the character and also am responsible for how they move around in the movie.

Sung: I’m a lighting supervisor. We are the pride of Blue Sky. There’s about 30 of us on the team and there are two lighting supervisors that look over the work of some 30 to 50 people. We work with the director and the art director and everyday we talk about color, lighting, shading, camera and such in the movie. If Lee kicks off the project, we are the ones to see it through to completion. We work on the film up until a month before it’s released.

How did you prepare for this animation?

Lee: When people think Blue Sky, they think either “Ice Age” or “Rio,” but we are always pushing the envelope at Blue Sky. So this time around we tried to present the viewers with a realistic animation. We put the focus on the facial expressions of the characters. 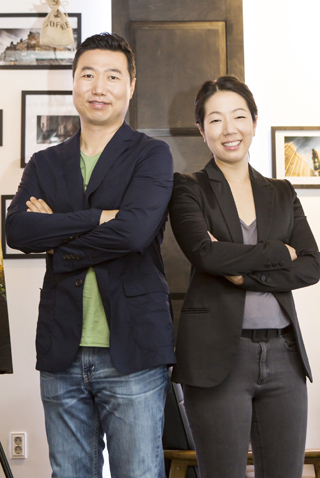 Sung: We researched for years before the movie to get it right. We studied different ways of maintaining focus with the camera, and utilized various lenses so it’s unlike any other animation. We also watched a lot of video clips to perfect our work. The lighting crew even went on a field trip to the mountain with a manual camera each, and while getting lost a few times, took a lot in for research.

We tried really hard to make it look realistic. Compared to our previous films, it’s a lot more lifelike.

Unlike other cartoons we wanted to make the scenes look like photographs.

What did you want to emphasize in the movie?

Lee: The first thing that the director told us was that when viewers were watching the movie he wanted them to be moved by nature as depicted in the animation.

Sung: One frame took 100 hours to render. One second consists of 24 frames and so for 1,000 frames you need a computer to be working non-stop for a month. And that was just for one scene in particular.

Lee: I worked on costume design on “Star Wars: Episode 3” and back then the outfits had a hanbok, or traditional Korean attire, feel. It’s kind of inevitable that a designer will leave his mark on aspects of costumes and such.

This time around, the helmet worn by the Leaf Men in the movie has the feel of the Silla Dynasty’s cavalry. As you’d know the Silla cavalry wore light garments and the Leaf Men do too.

Are you happy with the dubbed version’s cast?

Lee: I’m a fan of both Han Seung-yeon (KARA) and Jung Jin-woon (2AM). Han is very bubbly and stands out and so I thought she’d do well.

Sung: Although, I do think it would have a different feel to the U.S. version. I’d like to watch the Korean version.

I heard they worked really hard on it, so I can’t wait to see it. As you know, even in the United States Hallyu stars are big. My colleagues told me to make sure I see both of the stars while I visit.

What do you want the viewers to take note of as they are watching?

Lee: With animation we try to send out a positive message to the viewers. We tried to emphasize the importance of nature and family.

Sung: Because of my job when I watch a movie, I recall every thing that I went through as I was working on it. I’d like it if people watched the movie with the work of the lighting team in mind.

The movie is set to open in theaters nationwide Aug. 7 in both 2D and 3D.