Service industry finally gets some respect

Service industry finally gets some respect 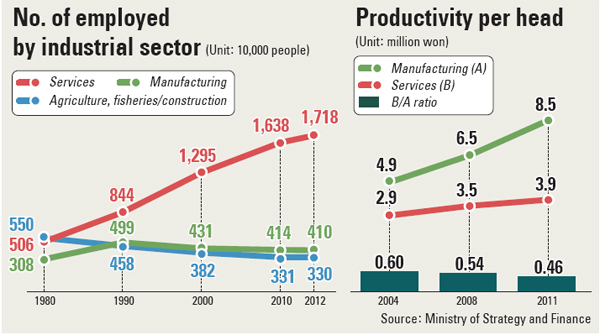 Korea is pursuing a paradigm shift from manufacturing to the service industry in order to recover from the current slowdown and achieve its goal of reaching 70 percent employment.

The government has come up with a plan to boost the nation’s service industry with a focus on eliminating discrimination against small providers in terms of tax incentives, financial support and regulations, which have favored manufacturers.

At a joint press conference yesterday by the Ministry of Strategy and Finance, Ministry of Science, ICT and Future Planning and Ministry of Culture, Sports and Tourism, ministers announced measures to streamline rules for tax incentives and financial support for small services providers, and boost the content industry and information security sector.

“Even though the service industry is responsible for 70 percent of the country’s total employment and 60 percent of GDP, productivity of the sector remains low compared to the manufacturing sector and other OECD countries,” said Hyun Oh-seok, deputy prime minister for economy and finance minister.

“The government highly recognizes the importance of the service industry. The latest measure would add new jobs in the short run and ramp up growth potential of our economy in the long run.”

According to the Finance Ministry, the service industry is the only sector creating jobs. Last year, about 17.2 million people found jobs in the service sector, up from 16.4 million in 2010. In the meantime, 4.1 million did so in the manufacturing sector in 2012, down slightly from 4.14 million in 2010.

Despite a fast-expanding service workforce, per capita productivity remains about 38.6 million won ($33,890), far lower than the 85.1 million won in the manufacturing sector.

The last administration had made about 20 attempts to boost the relatively underdeveloped service industry, but hot-potato issues involving privatization of the medical service sector faced strong opposition from opposition party lawmakers. Allowing foreign capital-based hospitals, casinos, international schools and universities were at the heart of controversy between the former government and lawmakers, but yesterday’s plan didn’t include any of these.

Unlike the past efforts, Hyun said, the latest plan is centered on regulation, technology and manpower.

The Finance Ministry puts its top priority on tackling regulatory discrimination against small retailers, restaurants and leisure businesses. Compared to manufacturers, those service providers face stricter rules if they want to receive tax incentives and financial support from the government.

Currently, four rules are applied to each sector of the service industry, a source of confusion.

The ministry will come up with a plan to streamline the rules after hearing complaints from service providers in cooperation with the Korea Small and Medium Business Administration in the fourth quarter.

To support small service firms with their R&D costs, the government will provide 17 percent of needed amounts, up from the current 10 percent.

Korea Technology Finance Corporation will establish a R&D center in January next year, which will serve as a comprehensive evaluation institution for service firms for objective assessments of technologies and their values.

For boosting exports of intangible service products, the Export-Import Bank of Korea will provide equivalent financial support to that given to exporters of goods.

“Service firms suffer difficulties getting financial help including guarantees and trade insurance benefits from financial institutes because they have less physical collateral than manufacturing companies,” the ministry said.

From next year, the Culture Ministry will start issuing certificates for companies that export certain amounts of service products and the Exim Bank will provide adequate amounts of loans based on the certificates to help them sell more abroad.

The ministry also let the immature leisure sector of the country lead overall growth of the service industry. It is considering installing outdoor barbecue kits at parks. But drinking alcohol will still be banned.

To meet rising demand for serviced residences for foreign travelers, the government will lift a prohibition on constructing such accommodation buildings in residential areas.

Considering that public awareness of the importance of the service industry remains low within society, the government plans to add academic courses to occupational colleges like Korea Polytechnics and Meister high schools in which students can learn related technologies and acquire licenses.

“Productivity of the Korean service industry is even lower than Taiwan’s and Singapore’s,” said Yoo Byung-kyu at Hyundai Research Institute in a report. “Since the country’s industrial policies have been focused on the manufacturing sector, the service industry has lacked government support including R&D investments, while suffering excessive regulations.”