Murray in Wimbledon semis to delight of fans

Murray in Wimbledon semis to delight of fans 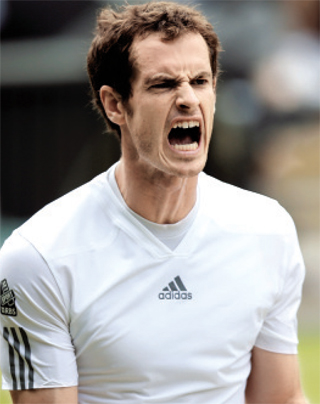 Andy Murray reacts during the quarterfinal against Fernando Verdasco at Wimbledon in London, Wednesday. Murray won 4-6, 3-6, 6-1, 6-4, 7-5 to enter the semifinals. [XINHUA/NEWSIS]

They stood and roared when he hit winners.

And when Murray dropped the first two sets of his Wimbledon quarterfinal on Wednesday, the 15,000 Center Court spectators were suddenly so silent that birds could be heard chirping.

By the time his five-set comeback was nearly complete, more than two hours later, the fans were greeting each point that went Murray’s way with celebrations of the sort normally reserved for a championship. It’s been 77 years since a British man won the country’s Grand Slam tennis tournament, and thanks to the second-seeded Murray’s 4-6, 3-6, 6-1, 6-4, 7-5 victory over 54th-ranked Fernando Verdasco, the locals still can hold out hope the wait will end on Sunday.

First things first, of course. Murray, who is from Scotland, will play in the semifinals at the All England Club for the fifth consecutive year on Friday, facing No. 24 Jerzy Janowicz of Poland. The other semifinal is No. 1 Novak Djokovic of Serbia against No. 8 Juan Martin del Potro of Argentina.

There is no doubt who will be the recipient of the most boisterous support.

“Great atmosphere at the end of the match. .?.?. I love it when it’s like that. It was extremely noisy,” said Murray, who lost last year’s Wimbledon final to Roger Federer. “They were right into it, pretty much every single point.”

Murray needed to summon some pretty strong tennis, and plenty of grit, for his seventh career victory after facing a two-set deficit. He never panicked - no matter what all of his self-admonishing muttering and gesticulating looked like - and eventually figured out how to handle Verdasco’s 130 mph serves and high-risk, high-reward style.

Murray’s mother, British Fed Cup captain Judy Murray, called the match “one of the toughest to sit through.”

He’s only 26, but he truly has matured as a player over the past 12 months.

After shedding tears following the 2012 Wimbledon final, Murray returned to the same spot four weeks later and beat Federer to win a gold medal at the London Olympics. Then, at the U.S. Open in September, he defeated Djokovic to win his first Grand Slam title.

Asked if his triumph in Flushing Meadows lessened the pressure to succeed at home, Murray said: “It’s pretty much the same. Not a whole lot’s changed.”

Murray tries to avoid reading coverage about him, but he can’t help seeing newspapers left in the locker room.

Even British Prime Minister David Cameron took an interest, writing on Wednesday morning on Twitter: “The sky over Downing St a little grey right now. Let’s hope it clears up for @andy_murray to win at #Wimbledon. Best of luck Andy.”

Wednesday’s other quarterfinals lasted a mere three sets each and the most compelling segments came at the very beginning of 2009 U.S. Open champion del Potro’s 6-2, 6-4, 7-6 (5) win against No. 4 David Ferrer, and the very end of Janowicz’s 7-5, 6-4, 6-4 victory over 130th-ranked Lukasz Kubot in the first Grand Slam match between two men from Poland.

Janowicz, 22, reached his first major semifinal - the first for a man from his country - by pounding serves at a tournament-high 140 mph, compiling 30 aces and saving all six break points he faced.