Puig keeps up rapid pace at the plate

Puig keeps up rapid pace at the plate 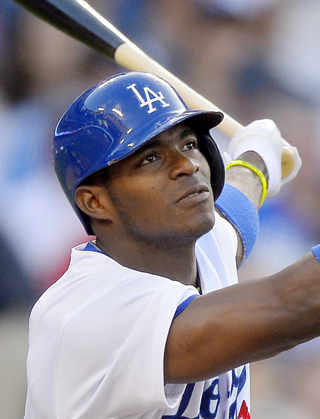 DENVER - Yasiel Puig is the National League player of the month for June, and it’s hard to argue with that one.

When it comes to the rookie outfielder making the All-Star team, that’s causing some debate.

The Los Angeles Dodgers phenom keeps setting records to start his career, winning NL player of the month on Wednesday to become the first player to capture the award in his inaugural month in the majors since it was started in 1958.

The 22-year-old slugger also captured the NL rookie of the month award by hitting .436 with seven homers and 16 RBIs in June. His 44 hits were a Dodgers rookie record for a month.

He’s been so sizzling at the plate that some are talking about putting him on the NL team for the All-Star game. The idea has sparked some conversation throughout baseball.

“To me, it’s an absolute joke,” Papelbon told the network. “The guy’s got a month.

“Just comparing him to this and that, and saying he’s going to make the All-Star team, that’s a joke to me.”

Puig takes it all in stride. He said recently through his translator that he really doesn’t care if he plays in the game.

“If the fans vote for me, that’s OK,” said Puig, who signed a $42 million, seven-year contract last summer.

Nothing Puig accomplishes on the field anymore really comes as a shock to Dodgers manager Don Mattingly, who has seen just about everything from the Cuban defector and simply expects it now.

No really, he does.

“You’re getting to be where you kind of expect him to do something all the time,” said Mattingly, who compares his slugger to a young Ken Griffey Jr. “If he doesn’t get a hit or get on base, you’re like, ‘What’s going on?’ It’s amazing.”

Puig is only the fifth player to win both awards in the same month since the rookie honor was introduced in 2001. The last player to accomplish the feat was Los Angeles Angels outfielder Mike Trout in July 2012.

“Whatever league that I’m in I’m going to do the best I can,” Puig said Tuesday after going 3 for 5 with a homer to begin July just as torrid as he left off in June.

Puig certainly left quite an impression on Rockies reliever Adam Ottavino, who served up his solo homer on Tuesday.

Ottavino tried to throw a slider low and away to Puig, only to have him hit it over the fence in the deepest part of Coors Field.