Pandas cost too much, Korea gets ibises instead

Pandas cost too much, Korea gets ibises instead 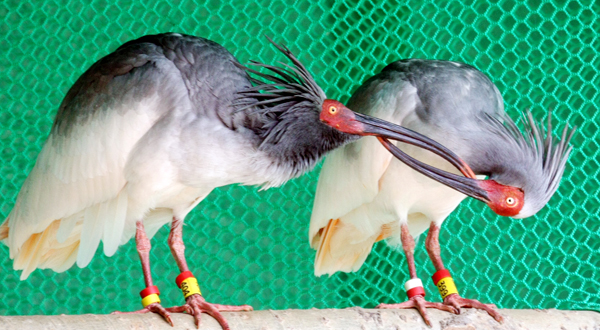 Two ibises, one male and female, were adopted from China in 2008 by the ibis restoration center in Changnyeong County, South Gyeongsang, to restore the species in the country. [JoongAng Ilbo]

Korea almost became a recipient of China’s panda diplomacy in time for President Park Geun-hye’s visit to the country last week, but the plan didn’t materialize due to the high cost of keeping the rare animal.

Since ancient times, China has used giant pandas as diplomatic gifts to other countries to express friendship. A source informed about the affairs of the Park administration told the JoongAng Ilbo Tuesday that he met with a special envoy from Beijing earlier this year and discussed the panda diplomacy.

“Chinese Vice Foreign Minister Zhang Zhijun visited then-President-elect Park as the Chinese government’s special envoy in January,” said the source. “At the time, I asked him to make a proposal to Chinese President Xi Jinping to send a panda to Korea in time with the Korea-China summit as a symbolic gesture.”

He said Chinese Ambassador to Korea, Zhang Xinsen, was also at the meeting and he was told later that the proposal was relayed to the highest leadership of China.

According to the source, China, through the Chinese Embassy in Seoul, asked if Korea has facilities to raise a giant panda if provided. The inquiry was also sent to the Blue House, the source said.

After a review, the government concluded that keeping a panda in Korea would cost at least 15 billion won ($13 million), including the construction of the special facility and payroll for the keeper. The Blue House, therefore, did not push forward with it.

Panda diplomacy using the cuddly giant bears, however, hasn’t always produced a happy ending. Japan received pandas from China and a baby was born in July last year. However, it died suddenly only after six days, causing an outcry in China.

The short-lived baby panda caused a diplomatic row because Tokyo governor Shintaro Ishihara, an extreme rightist politician, proposed before its birth that the baby bear should be named after the Senkaku Islands. China and Japan have long engaged in territorial disputes over the group of uninhabited islands, and the Chinese government reacted sensitively to Ishihara’s suggestion.

While Korea did not receive pandas from China in time for Park’s trip to the country last week, it still received rare birds from the country. After signing an agreement to cooperate to protect the endangered species of crested ibises, China promised to give two male birds to Korea.

Over the past years, China has sent many animal diplomats to Korea. During his 1994 trip to China, then-President Kim Young-sam received a couple of Siberian tigers, also known as Mount Paekdu tigers, from then-Chinese President Jiang Zemin. The male and female tigers were named “Paekdu” and “Cheonji” and received special care in Korea, but they failed to produce any offspring. They died in 2010 and 2011.

China, then, provided another pair of tigers to Korea. On the sidelines of the November 2005 Asia-Pacific Economic Cooperation summit, Chinese President Hu Jintao presented a pair of tigers to President Roh Moo-hyun. Of them, the female tiger abruptly died the next year.

Russia also sent a gift of Siberian tigers after President Lee Myung-bak’s summit with Russian President Vladimir Putin in September 2010. They have been living in the Seoul Zoo since 2011.

Korea also received a pair of polar bears from Russia. In 2011, then Seoul Mayor Oh Se-hoon made a request to Moscow Mayor Sergey Sobyanin in February 2011 and Moscow sent the pair to Seoul.

Japan has also sent some animal diplomats to Korea. Red-crowned cranes are an endangered species and there are about 2,500 of them alive around the world.

Japan sent a pair of the rare birds to Korea in 2008 and the Institute of Ornithology of the Kyungbook National University succeeded for the first time in Korea in artificial incubation in July 2009.