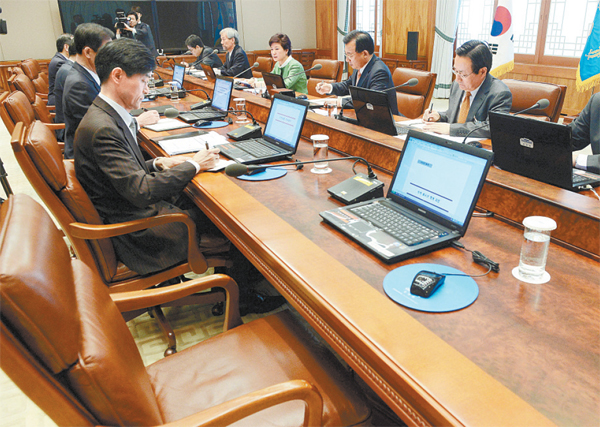 The presidential office has been operating without a senior political affairs secretary for more than a month, but no moves have been made to fill the vacancy.

After the embarrassing sexual scandal of the presidential spokesman Yoon Chang-jung, Lee Nam-ki, senior Blue House secretary for public relations and immediate supervisor of Yoon, stepped down from his post in May.

On June 3, President Park Geun-hye moved her senior political affairs secretary and key confident, Lee Jung-hyun, to head the public affairs of the Blue House, but no successor for Lee had been announced as of yesterday.

“There has been no action, so the appointment won’t be likely to come this week,” said a senior official of the Blue House.

Another senior presidential aide, however, said the appointment will soon be made because of the mounting political issues to be dealt with, including the National Assembly’s plan to investigate the National Intelligence Service’s alleged interference in the presidential election.

While no information on the appointment progress was formally presented, speculation rose that Kim Seon-dong, a former Saenuri lawmaker currently working as political affairs secretary, will be promoted to the senior secretary post.

Others say that a handful of politicians, including Kim Hak-song, Kim Seong-jo and Yoon Won-joong, were undergoing the primary vetting process.

Since it became established practice that an incumbent lawmaker must surrender his or her seat to join the Blue House, speculation grew that the new political affairs senior secretary is not likely to be a sitting lawmaker.

“Because the Blue House no longer has the authority to influence the nomination process, a political veteran trusted by Park will likely be appointed to the post,” a Park associate in the ruling Saenuri Party said.

Although the vacancy was left open for more than a week, the Blue House appeared to face no serious difficulty, because it has been mainly focusing on security and foreign affairs issues in time with Park’s visit to China and summit with Chinese President Xi Jinping last month. Concerns, however, grew that leaving the post empty for too long will generate problems.

Nicknamed the “king of the secretaries,” a senior political secretary to the president is thought to have significant power.

During Korea’s past military regimes, the senior political secretary often controlled the ruling party and persuaded opposition lawmakers by using “the intention of the president” as well as money.

This power, however, dwindled as Korea adopted more open and transparent political financing practices. In the middle of his presidency, President Roh Moo-hyun scrapped the post from the Blue House secretariat.

Since her inauguration in February this year, Park largely shrank the political affairs function of the Blue House.

“In the Blue House and the administration, the total number of civil servants working for political affairs was reduced to one-tenth of that from the Lee government,” said a senior Blue House official.

During the Lee administration, 22 civil servants worked at the offices of the Blue House’s first and second political secretaries, while the minister without portfolio had about 70 workers.

Park, however, merged the two political secretaries into one and cut down the number of staffers to nine, including an administrative assistant. She also shut down the office of the minister without portfolio.

Park Heong-joon, a former lawmaker of the Saenuri Party who served as the senior political affairs secretary of Lee, said it is undesirable for Park to operate the Blue House without the political senior aide for too long.

“Policy making is also related to political affairs,” he said. “The senior political secretary oversees not only politics but also policies. If the post is vacant, someone will have to perform the role, but the job is not easy, and it is unnatural to have someone irrelevant to lead the task.”

“The function of political affairs is often seen as insignificant but in fact, it is the cornerstone of running the government,” Lee said. “When it stumbles, everything will fall like a house of cards.”

He also said the role of political affairs is like oxygen. “You don’t see how important it is until there is a crisis,” he said.

And with a month-long vacuum, the concerns appeared to materialize with the lack of a control tower to coordinate affairs between the ruling party, Blue House and the government.

Some say Park probably does not miss having a senior political secretary because she prefers to take the bull by the horns rather than having behind-the-curtain negotiations, but others in the Saenuri Party said it is undesirable to continue without a political aide for too long.