Mr. Jung, 57, recently decided to withdraw a 30 million won ($26,264) investment in a fund managed by a local investment company.

Jung had subscribed to the Mirae Asset China Solomon fund since November 2007 and after six years, the return on the investment was a negative 53 percent.

If he had put the 30 million won in a bank, he wouldn’t have lost anything and would have earned a bit in interest.

Jung didn’t withdraw his investment because he needed the money. He just gave up on Chinese stocks. And Jung isn’t alone.

On Thursday, The Wall Street Journal reported that foreign investors are increasingly pulling out investments from the Chinese market.

Although money is being taken out of many emerging economies out of concern over the possibility of the United States Federal Reserve tapering off its quantitative easing, the report noted that the capital outflow is especially noticeable in China.

The report quoted data provider EPFR saying, “Global fund managers have yanked money out of Chinese stocks for 16 of the last 18 weeks.”

In particular, there was an outflow of $834 million over five trading days from May 30 to June 5, the largest outflow since January 2008 when the global financial meltdown hit many markets.

With capital being taken out of the country, the benchmark Shanghai Composite has plunged an average of nearly 13 percent this year. 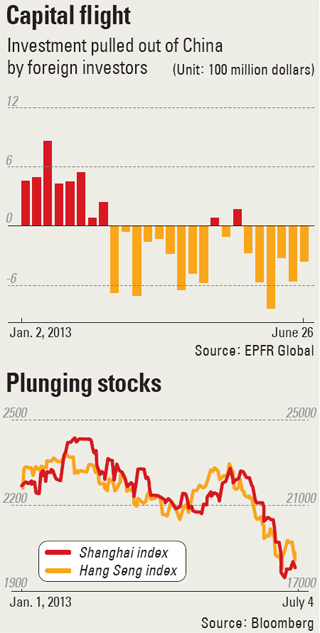 The Wall Street Journal recently noted that the outflow of foreign capital is due to concerns rising from the U.S. walking away from its fiscal policy measures.

But it is also due to investors’ mistrust of the Chinese leadership and on expectations that the yuan will weaken.

The newly installed Chinese leadership, which officially took over in March, has been making clear that to improve the soundness of its banking system and economic fundamentals, it can sacrifice some quantitative growth.

On June 29, Chinese President Xi Jingping was quoted as saying by Xinhua News Agency that when assessing the performance of officials from the Communist Party of China, their contributions to growth should be balanced with improving people’s livelihoods, developing society and improving environmental pollution levels.

“We should never judge a cadre simply by the growth of gross domestic product,” Xi was quoted as saying.

The Chinese government has been announcing strict new regulations this year in its real estate and finance sectors.

In Korea, according to Zeroin, a fund evaluation company, local investors took out 684.3 billion won worth of investments from Chinese funds this year.

“There is steady demand among investors to pull out their money from Chinese funds regardless of fluctuation in stock prices,” said Lee Eun-kyung, a researcher at Zeroin.

In May, according to the Wall Street Journal, major shareholders (including executives) of smaller Chinese companies have net sold 24.7 billion yuan ($4.03 billion) worth of shares, the largest monthly amount since 2009.

Meanwhile, officials brush off concerns, saying that China’s focus on quality growth rather than quantitative growth will in the mid- and long-term improve conditions in the Chinese market.

“If China’s efforts to improve its economic constitution are well received by investors from a mid- and long-term perspective, global capital will then start to be flowing into the Chinese market,” said Chun Byung-suh, a professor at Kyunghee University.