Braille printer gives the blind the gift of books

Braille printer gives the blind the gift of books 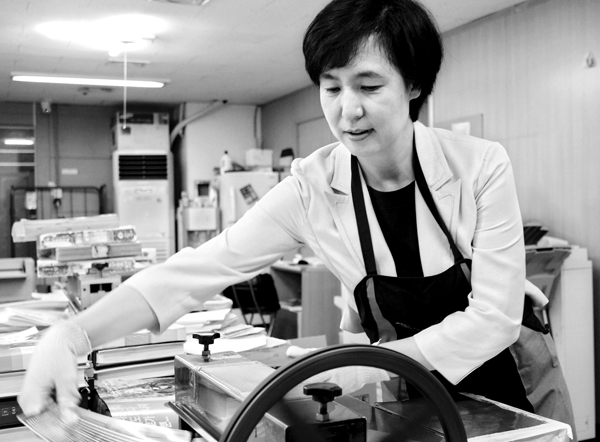 Yook Geun-hae, representative of Braille Publishing, prints braille books. Yook, who said she must print the books by hand, injured her left index finger by accidentally stamping her finger in the machine a few days prior to the photograph. By Han Young-ik

The sound of a roller on a printing machine rings out.

Yook Geun-hae, representative of the social enterprise Braille Publishing, is printing in braille at the publishing company on the third floor of a shabby building in a market.

“Blind people, especially those children who have been blind since birth, want to read books more than anyone else, as it is the only way to communicate with the world. I want them to have bigger dreams of becoming scientists, lawyers and politicians than becoming masseurs. I wish there will be many successful people who would confidently say that the braille books that I read made me who I am today. That is my dream and calling,” said Yook.

Yook is currently supplying approximately 70 percent of the domestic braille books and is also developing tactile books and books labeled as braille for the first time.

She is also operating the one and only Korean Braille Library for the blind, which was established by her farther Yook Byeong-il in 1969 at his own expense.

She has gone on to succeed her father.

“My father lost his sight when he was 10 years old. When he became 40, he opened Korea’s first braille library by devoting his private fortune in Jongno 5-ga, central Seoul.”

“Although we were wealthy in Sinchon, northwestern Seoul, our family’s fortune declined when my father started this business. I was always proud of my father, but I thought I wouldn’t go on to do this kind of work, and so I took another job. However, now that I am doing this work after all, I think it was fate.”

Yook could not graduate college in time as the family fortune was drained. After graduating from high school, Yook made money by working and graduated from Dankook University, majoring in statistics.

Yook dreamed of a different life from her father. However, in 1992, she was tasked with taking care of the library. Since then, for 21 years, she has been dedicating herself to the library and the publishing operation. Yook even earned her master’s degree in social work and doctorate in library and information science with the hope that she would be better at her job.

“At first, I was half forced to start this job, but as I did, I began to have a sense of purpose and vocation. I also could learn by heart why my father entrusted me with this task. When the parents of the blind children thank me, saying their children are growing so well by reading these books, I feel really proud.”

“Teachers of the schools for the blind also ask me to continue publishing books for their students. Now, these books are sold at major online bookstores, but 12 years ago, I almost went out of business due to management difficulty.”

“Now, the braille library has over 60,000 books for the blind and the publishing operations are headed in the right direction.”

She went on to speak about the value of having a dream.

“I want to contribute to creating a world where those with disabilities can enjoy culture and welfare without discrimination. The potential of children with disabilities is much greater than our preconceptions.”

“These children do nothing but read. They do not play computer games or watch TV like other youths. They really love books and their imagination abounds. Their concentration is also excellent. If they read a lot of good books, I am more than convinced that they will become the great wealth of our country. It also means that the number of children that the country should take care of will reduce. I want to grow them as people who could carry out social roles by themselves through books. That is my biggest dream.”

She has developed tactile books and braille-labeled books.

“Tactile books were developed for the blind children since birth, who have not recognized the forms or colors of objects. For instance, in the fairy tale ‘The Sun and the Moon,’ there is a scene with rotten rope. The tactile books have the real rotten rope attached to the book, so that the children can touch and be able to feel the rotten rope. The tactile book ‘Touch Me’ was successfully exported to Japan and might possibly be exported to Spain and France.”

“Braille-labeled books are those books with braille labels attached to transparent coated papers on general books. I thought I wanted to make books that they can read with family or friends without vision problems. They are necessary in eliminating barriers by reading the same book and having conversations.”

For multicultural families, it publishes bilingual books and books marked with sign language for the people with hearing disabilities.

“Among 50,000 kinds of books published annually, the proportion of braille books or audio-recorded books is around 2 percent and those for children are only 0.01 percent. I want disabled children to have dreams by developing more diverse books. I will pour everything I have into this.”