With 7 wins, Ryu shut out of All-Star Game

With 7 wins, Ryu shut out of All-Star Game 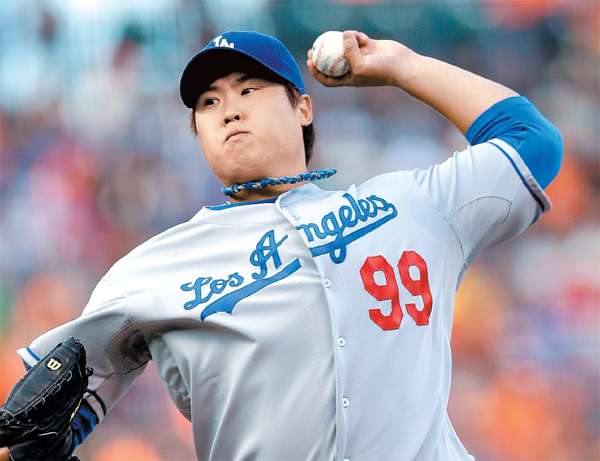 Ryu Hyun-jin of the Dodgers pitches against the Giants on Friday in San Francisco en route to his seventh win. [AP/NEWSIS]

Ryu Hyun-jin of the Los Angeles Dodgers failed to make it onto the Major League All-Star roster announced yesterday, Korean time, a day after the Korean rookie pitcher recorded his seventh victory of the season.

Choo Shin-soo of the Cincinnati Reds was also left off of the list.

Major League Baseball announced 66 All-Stars and 10 candidates for two fan-pick finalists ahead of the All-Star Game at Citi Field in New York on July 16.

The only Asians included on this year’s All-Star roster were two Japanese pitchers - Yu Darvish (8-4) of the Texas Rangers and Hisashi Iwakuma (7-4) of the Seattle Mariners. Park Chan-ho and Kim Byung-hyun are the only two Korean MLB All-Stars so far. Park played in the 2001 All-Star game and Kim in 2002.

Ryu, who signed a $36 million, six-year deal last November to become the first player to directly move from the Korea Baseball Organization to the Major Leagues, had All-Star hopes with his solid start. He collected six wins in his first 11 starts, the last on May 28 against the Los Angeles Angels with his first shutout. 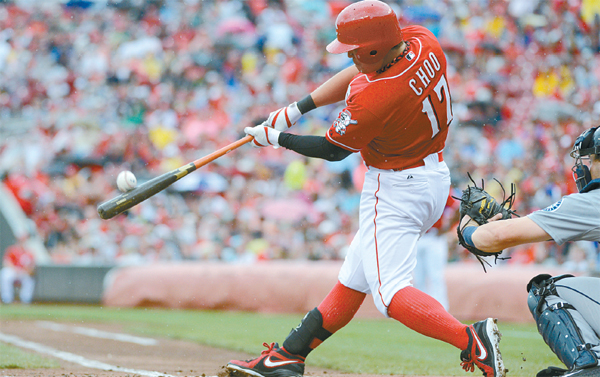 Choo Shin-soo of the Reds hits in the first inning against the Seattle Mariners Saturday in Cincinnati. Choo went 2-for-4. [AP/NEWSIS]

He failed to get a win in June, but recorded quality starts in all five appearances. During that stretch he had a 2.70 ERA, and suffered a loss.

The 26-year-old southpaw got his seventh win on Saturday, Korean time, against the Giants. Ryu (7-3) allowed two runs on four hits over 6 2/3 innings in the Dodgers’ 10-2 win.

The seventh win came with a change in his form, which some local experts said was a positive. He spent less time in motion, with less ball speed.

“The higher a pitcher lifts his leg, the faster his ball becomes. Nonetheless, Ryu lowered his leg to break the batters’ rhythm and it was successful,” said Son Hyuk, MBC Sports Plus baseball commentator.

Ryu retired 11 straight batters between Pablo Sandoval’s double in the third and Brandon Belt’s double leading off the seventh. He also had an RBI single in the Dodgers’ six-run third inning.

Choo, who left the Cleveland Indians last year, also sought his first All-Star appearance in his nine-year career and his solid start kept him in the fifth-highest position among National League outfielders in early All-Star voting.

Yesterday, Choo extended his hit streak to four games when he went 2-for-4 with an RBI against the Mariners. The Reds won 13-4.

In Friday’s game between the Dodgers and the Giants, Juan Uribe matched his career high with seven RBIs.

Uribe chased Matt Cain with a bases-clearing triple in the third and hit a two-run homer in the seventh. He also drove in seven runs for the Chicago White Sox in a 17-14 loss to the Montreal Expos on June 19, 2004.

“A game like that, you always remember,” Uribe said. “I think I was a little lucky too. I’m happy to have a game like that but I like winning more. Right now I am feeling good.”

The Dodgers won for the 11th time in 13 games. Hanley Ramirez had two hits to extend his hitting streak to 16 games.

“After we got the lead I felt more comfortable,” Ryu said. “I changed my delivery a little and the outcome was not too bad. Everything worked out.”

There was a bit of a downer to the big victory, with center fielder Matt Kemp departing due to an irritated left shoulder.

“I just wish I could stay on the field,” Kemp said. “I don’t ever want to get used to getting hurt. It could have been worse. I felt something weird in my shoulder that scared me. It hurt worse than running into the wall.”

Kemp received a cortisone shot and will miss Saturday’s game. He will be re-evaluated Sunday.

The Giants have dropped four straight and 12 of 14. Hunter Pence and Tony Abreu each drove in a run for the World Series champions.

“We’re getting tested,” manager Bruce Bochy said. “Hopefully you get stronger when you’re tested. You hate to see what’s going on. It’s a good group. It’s not like they’re quitting. They’re probably trying a little too hard.”