A ‘true view’ of 18th-century artwork

A ‘true view’ of 18th-century artwork 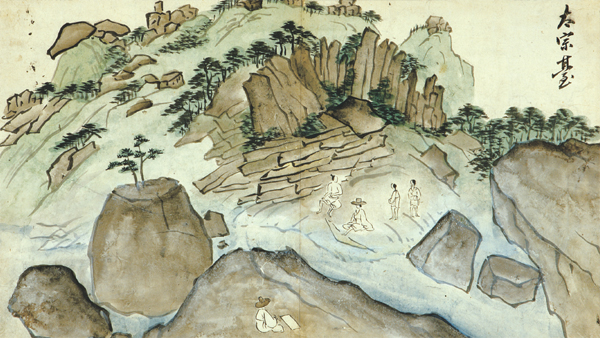 An 18th-century painting titled “Journey to Songdo.” Provided by the museum

Nestled in a dark corner of the National Museum of Korea is a special exhibit commemorating the 300th anniversary of the birth of one of Korea’s most influential artists. “A Painter’s Life: Kang Se-hwang and Literati Culture in the 18th century” features some of the titular artist’s works, including paintings and poetry.

Kang Se-hwang, who often published his work under the pen name “Pyoam,” was a scholar, painter, and government official who lived in the 18th century during the Joseon Dynasty.

“Kang is a representative of 18th-century literati culture. He wrote and painted well. He also networked with other painters,” says Min Kil-hong, a researcher at the National Museum of Korea. “It is possible to say that without understanding Kang, you can’t understand 18th-century paintings.”

Kang Se-hwang was known for his “true-view” landscapes, a style of painting in which the artists created a realistic work from sketches they made on location. Kang painted a number of such paintings, including “Journey to Songdo” and “Scenes in Buan Prefecture.” Kang also incorporated some of the earliest known Western influences in Korean art in these - and other - paintings, although it may not be apparent to the modern viewer.

“If you look at these paintings, the foreground is larger while the background is smaller to show perspective, which shows evidence of a Western style,” says Min.

Traditionally, Korean paintings did not differentiate the foreground and background by forcing such a perspective. Instead, objects intended to be closer to the viewer were painted lower within the composition while objects further away were painted higher. 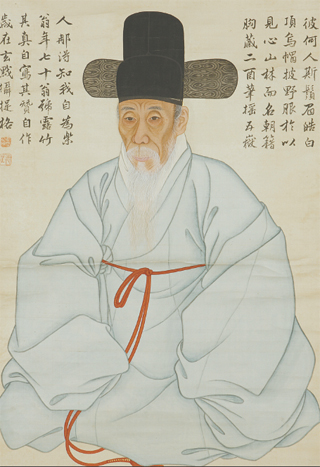 An 18th-century self-portrait of Kang Se-hwang.Provided by the museum

Something that is immediately noticeable in Kang’s paintings is that there is a certain roughness in some of his compositions. Many lines are drawn loosely and there is a definite lopsidedness in the way he renders perspective that makes buildings look unbalanced.

One ink drawing of books, brushes and inks is particularly crude. Titled “Scholar’s Accouterment,” its subjects are drawn with crooked lines and little care shown toward dimensions. But it is notable nonetheless, despite its roughness and mundane subject matter, because very few people of the time thought to document their stationery in such a manner.

“Kang Se-hwang wasn’t a professional painter,” explains Min Kil-hong when asked about the roughness of some of Kang’s work. “So his paintings, rather than being precise and lifelike, are drawn with a looser style.”

Such roughness in a modern viewer’s eyes, however, can do little in undermining the esteem in which Kang was held by his contemporaries. He is known to have networked with other notable figures in Korean culture, including Huh Pil, Shim Sa-jung and Kim Hong-do. Kang also provided advice and criticism through comments written in corners and margins of other artists’ works.

The exhibit includes a number of works that feature Kang’s comments. One such example of Kang’s commentary is included in a “West Sea Breeze” by Kim Hui-seong, which depicts two people walking in front of a house. Kang commented in the margins that he thought that the people were drawn too large in comparison to the house so that the scale between the foreground and background didn’t seem natural.

Kang Se-hwang never met many of the artists whose work he commented on. Paintings were often sent to him via intermediaries specifically for his advice and critiques. Because so many artists were seeking his opinions about their work, about 80 percent of the postscripts that are featured on existing 18th-century Korean paintings are attributed to Kang, showing just how much of an influence he had on Korean art in his lifetime.