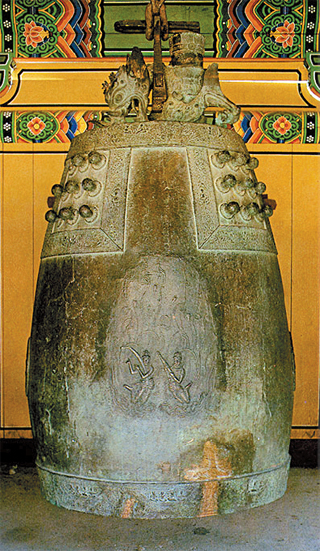 This bronze bell of Sangwonsa Temple, alongside Odaesan Mountain, was cast during the reign of King Seongdeok of Silla (725).

It is 1.67 meters (5.47 feet) tall and 0.91 meters in rim diameter. On the top, the hook of the bell is carved in the shape of a dragon with a large head and strong claws, and beside it, the hollow tube for controlling the tone is decorated with the patterns of lotus flowers and vines.

It has wide bands around the rim and shoulder, and below the shoulder band there are four panels, each containing nipple-like lotus flowers in high relief.

The bands and frames of the panels are bordered with pearl patterns and decorated with vine patterns and several figures playing music.

Sets of two apsaras (heavenly maidens), kneeling on clouds and playing musical instruments, are carved around the center.

Between the apsaras, dangjwa (the striking point) is decorated with pearl and lotus flower patterns.