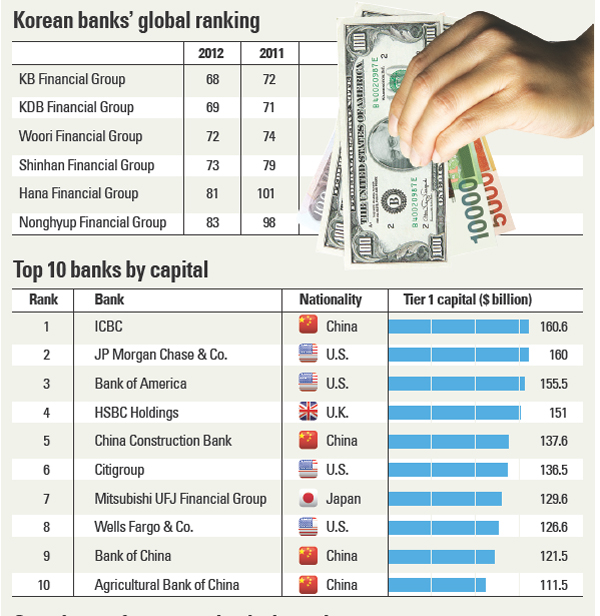 Korean banks listed among the world’s top 100 grew to six from five at the end of 2012 as Hana Financial Group made it onto the list.

Korea Exchange Bank (KEB) was not included in the study as it is now an affiliate of Hana Financial Group. Hana bought the majority share of KEB in early 2012 from U.S. private equity fund Lone Star.

Of the 10 Korean banks in the top 1,000, nine saw their global ranking improve compared to a year ago. The top four Korean banks jumped from one to six spots. Hana Financial Group, however, went from 101 in 2011 to 81.

“The reason Korean banks saw their rankings improve last year is largely due to the appreciation of the Korean won against the U.S. greenback,” said a BOK official.

However, the profitability and financial soundness of Korean banks fell compared to other banks in major economies like the United States and China.

The return-on-assets (ROA), an indicator of profitability, for Korean banks fell from 1.03 percent to 0.71 percent.

The ROA of American banks inched up from 1.01 percent to 1.02 percent, while that of Chinese banks improved from 1.56 percent to 1.58 percent.

Industrial and Commercial Bank of China, which took third place in 2011, topped the list after bumping Bank of America, which had held the spot for three years.

The American bank ranked third in 2012 behind JPMorgan, which held the same spot as the previous year.

ICBC wasn’t the only Chinese bank to improve its standing. China Construction Bank saw its rank inch up from sixth to fifth in 2012, while Bank of Communications jumped seven from 30th to 23rd.

American and Chinese banks shared the top spot for the most banks on the top 10 list at four each.

The United States has the most banks in the top 25 with six, followed by China with five. The U.K. and Japan were tied for third with four each.

Among the six U.S. banks in the top 25, including JPMorgan, three saw their ranking unchanged. Goldman Sachs inched up from 20th to 19th, while Citigroup fell from fifth to sixth.