Bartoli breaks through in her 47th Grand Slam

Bartoli breaks through in her 47th Grand Slam 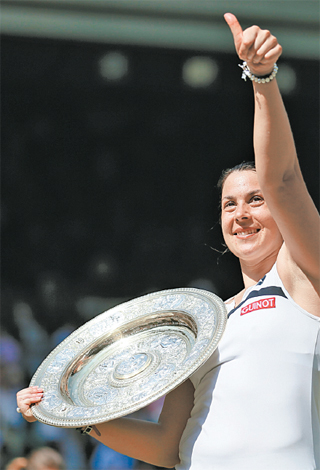 LONDON - Ever since she was a kid practicing until midnight with her father, Marion Bartoli went about playing tennis her own way.

The two-handed strokes for backhands, forehands, even volleys. The hopping in place and practice swings between points, which help her focus. The unusual setup for serves - no ball-bouncing, arms crossed, right wrist resting on her left thumb before the toss.

Whatever works, right? This unique Wimbledon, appropriately enough, produced a unique champion in the ambidextrous Bartoli, the 15th-seeded Frenchwoman who won her first Grand Slam title by beating 23rd-seeded Sabine Lisicki of Germany 6-1, 6-4 Saturday in an error-filled, one-sided final that was far from a classic.

“It’s always been a part of my personality to be different. I think being just like the other one is kind of boring. I really embrace the fact of being a bit different,” said the 28-year-old Bartoli, who plays tennis right-handed but signs autographs with her left.

This was Bartoli’s 47th Grand Slam tournament, the most played by a woman before earning a championship.

She is the only woman in the 45-year Open era to win Wimbledon playing two-fisted shots off both wings (Monica Seles, Bartoli’s inspiration for that unusual style, collected her nine major titles elsewhere).

Unlike Lisicki, a first-time major finalist who was admittedly overwhelmed by the occasion and teared up in the second set, Bartoli already had been on this stage, with the same stakes. Back in 2007, Bartoli won only five games in a two-set loss to Venus Williams in the Wimbledon final.

Bartoli became the first woman in the Open era to win Wimbledon without facing anyone seeded in the top 10 - her highest-rated opponent was No. 17 Sloane Stephens of the United States in the quarterfinals. That’s in part because of all of the injuries and surprises, including exits for No. 2 Victoria Azarenka, No. 3 Maria Sharapova, No. 5 Sara Errani, No. 7 Angelique Kerber, No. 9 Caroline Wozniacki and No. 10 Maria Kirilenko by the end of the second round.