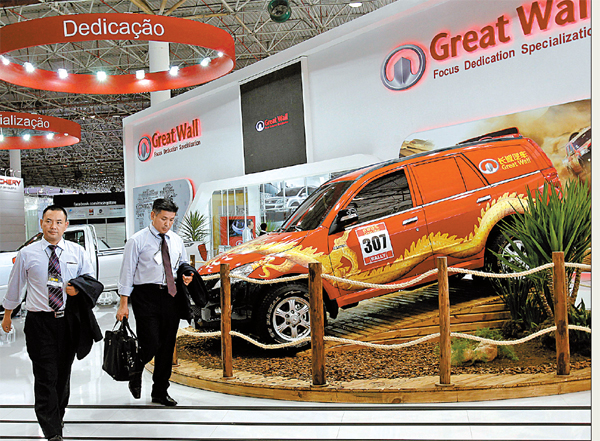 His Baoding, China-based employer is so profitable it generates a fatter margin than any listed carmaker in the world. Behind the success is Chairman Wei Jianjun, who has built China’s biggest SUV maker with a leadership style that stands out for its emphasis on discipline and frugality.

“The military training is pretty serious and tough,” said Wang. “Not only new hires but people who get promoted, even those becoming department heads, need to redo training.”

Great Wall represents a rare breed of Chinese automakers independent of foreign partners and government, sparing it from having to split profits and endure extra bureaucracy. With the stock surging 60-fold in Hong Kong since its 2008 low, Wei has become Asia’s wealthiest car executive, with an estimated fortune of $6.5 billion as he strives to create China’s first global automotive brand.

“Wei is a real professional, a real entrepreneur,” said Bill Russo, formerly vice president of Chrysler Northeast Asia and now president of automotive consultant Synergistics in Beijing. “If there’s one or two automakers able to survive all the competition with foreign rivals in the next decades or so, Great Wall will definitely be one of them.”

Great Wall could become the next Hyundai Motor, he said.

Wei, estimated in the Bloomberg Billionaires Index to be $1 billion wealthier than Hyundai Chairman Chung Mong-koo, has signaled Great Wall will eventually outsell Chrysler’s Jeep globally and is targeting sales to double over three years to 1.3 million vehicles by 2015.

Though lagging behind major automakers in scale, low costs help its operating margin beat everyone - even Fiat SpA’s Ferrari. It will probably top the industry this year at 16.4 percent, according to Max Warburton, an analyst at Sanford C. Bernstein.

Chinese automakers are a decade away from delivering their first globally competitive vehicle, though that’s only one or two product cycles in the auto industry, Warburton said. He hired specialists to tear apart and test a Great Wall H5 for a report in February and found the SUV’s gearbox had “truly awful” vibrations and braking was poor, though it drove well. Despite the H5’s shortfalls, it made a “massive leap forward” in quality with the newer H6, he wrote.

While the company has had its share of growing pains - it recalled thousands of vehicles in Australia last year after regulators found asbestos in parts - Wei said Great Wall’s ability to develop technology will determine its future.

“We have to own core technologies and make breakthroughs,” Wei said in an interview during a plant tour on May 31. “The biggest risk we’re facing is possible complacency.”

Net income will probably rise 24 percent to 7 billion yuan ($1.1 billion) this year after surging 66 percent in 2012, according to the average of 16 analyst estimates compiled by Bloomberg.

Wei, born in Baoding in 1964, said he was greatly influenced by his father, an artillery soldier who ventured out on his own to make boilers.

After several factory jobs, Wei branched out. At 26, he took over a small car-modification business and turned it into a van maker. He later shifted focus to pickup trucks after witnessing their popularity in Thailand. Small business owners and farmers turned Great Wall’s Deer into China’s most popular pickup brand by 1998.

Then anti-pollution laws restricted trucks in major cities, prompting Wei to switch to SUVs. Today, the company relies on SUVs for almost half its sales and is poised to lead the nation’s crowded SUV market, the fastest growing segment of China’s auto industry, for an 11th year.

“They don’t try to overreach,” he said.

As Great Wall grew, Wei recruited Wang Fengying, 43, his top sales chief for the past two decades, who says she doesn’t shy away from telling her boss that he’s wrong.

“We argue all the time,” Wang said in an interview. “Our goals are the same, so we can always find common ground.”

Wang said five years ago she opposed the rollout of a model called Gwperi endorsed by Wei, who overruled her, only to see the subcompact flop. The debacle is engraved in red at Great Wall’s two “Boulders of Shame,” where one lists major failures in product development and the other identifies officials who have been jailed for accepting bribes from suppliers.

Wei has more eccentricities, according to Zhang Yun, who has advised him for five years on strategy. The billionaire is so frugal he smokes 10 yuan-a-pack Zhongnanahai cigarettes and once scolded a group of dealers for leaving too much food on the table after a meal, Zhang said. He sleeps most nights in a room connected to his office and starts work at 7 a.m. in a gray uniform, Zhang said.

Then there’s the discipline.

In Baoding, famous for donkey burgers and home to the oldest military academy in modern Chinese history, Great Wall makes recruits endure foot drills and push-ups. The idea is for them to build endurance, increase willpower and understand the corporate culture, according its website.

“I have gone to other factories in China and when it’s time for lunch, everybody runs to the cafeteria at the same time,” said Russo. “They don’t do that at Great Wall.”