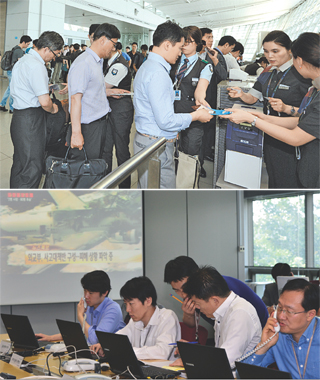 Top: A Korean government investigation team leaves Incheon International Airport to board a special flight headed to San Francisco. Above: Asiana employees are busy assessing the situation in an emergency room set up at company headquarters in Gangseo, southwestern Seoul. The room was set up an hour after the crash. [Joint Press Corp. / NEWSIS]

Asiana Airlines, the nation’s second-largest flag carrier, yesterday issued a public apology regarding the crash in San Francisco, saying it will put its best efforts forward to settle the crisis.

“Our deep apology goes to passengers, their family members and all the people who are concerned about this accident,” said Asiana President and CEO Yoon Young-doo at a 3:30 p.m. press conference at company headquarters in Osoe-dong, western Seoul. “Asiana Airlines is currently investigating casualties and the exact cause of the accident by setting up accident countermeasure units at our headquarters and in the United States.”

However, most of Yoon’s answers regarding the accident were either “we don’t know” or “can’t be determined at this moment,” and he said he would not speculate on the situation until the investigation result is released by the U.S. National Transportation Safety Board. The 62-year-old CEO said compensation for passengers and their families has not yet been determined.

Since the crash at 3:27 a.m. Korean time, Asiana has been on full-alert. The company reportedly gathered employees about an hour later to set up a crisis management center at its headquarters. Similar emergency centers were set up in the United States and China, where 141 of 291 passengers on board were from.

Asiana officials said all workers in its U.S. branch were ordered to work via emergency contact, as some were reportedly vacationing after the July Fourth holiday.

Kumho Asiana Group Chairman Park Sam-koo and Yoon returned from China immediately after hearing of the accident. They had been scheduled to attend the award ceremony at the Kumho Tire Women’s Open yesterday.

More than 50 employees of the airline have been assigned to the crisis management center, which also was crowded with reporters since early morning. Most employees at the emergency center were busy talking on phones to contact those in the United States for more information.

“I ate no breakfast at home and came straight to work,” said a company official. “Everyone here is working hard and will put forward our best effort to manage the situation.”

The company yesterday dispatched its 18-member investigative team and support team along with officials from the Ministry of Land, Infrastructure and Transport at 1:30 p.m. on a special plane from Incheon International Airport. It also sent additional support personnel later in the afternoon.

The company has set up a waiting room for family members of passengers and crew at the Incheon airport to help them determine the whereabouts and condition of their loved ones.

It later opened a family center at its headquarters because some family members of the passengers apparently hadn’t received any word from the airline. Some family members said Asiana failed to respond quickly and effectively to confirm the casualty situation and relay information about the crash.

The company issued a short press release around 6 a.m., about two and a half hours after the crash, and held a briefing about an hour later.

The official briefing from Yoon came nearly 12 hours after the accident.

Asiana claimed that it was difficult to get reliable information quickly because of the distance involved and it was busy setting up countermeasures.

According to Yoon, the airline couldn’t reveal the names of passengers because of its privacy protection policy. However, it will confirm passenger information and offer help if families of passengers contact the company’s emergency center.

As for the casualty controls and hospitalized passengers, the company said it isn’t allowed to contact hospitals in the United States and had limited resources to find out the conditions of injured passengers because the rescue team in San Francisco first had to move them to hospitals.

Meanwhile, industry observers speculate the accident will hurt Asiana’s efforts to enhance its performance in the third quarter.

According to data from Daishin Securities, Asiana is expected to have sales of 1.3 trillion won ($1.1 billion) and an operating loss of 20.9 billion won for the second quarter. But it had expected Asiana could be poised for a turnaround in its third quarter earnings following the vacation season and a decline in fuel costs.

Analysts said the accident will not severely affect Asiana’s financial situation since it will be covered by insurance backed by a group of nine Korean companies.

According to data from the Financial Supervisory Service and Financial Services Commission, Asiana’s Boeing 777-200 aircraft is under aviation insurance that can cover damages of up to $2.38 billion.