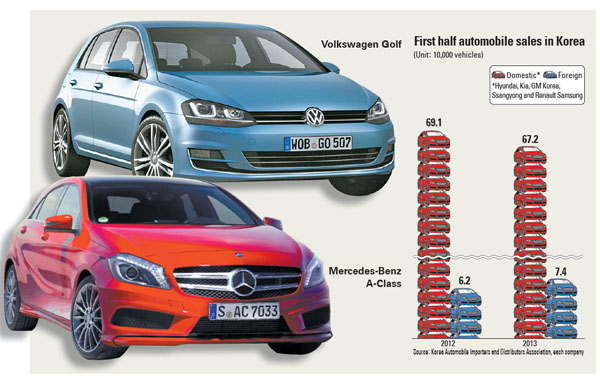 Entering the third year of Korea-EU FTA, tariffs imposed on imported automobiles were reduced as of July 1. According to the Korea Customs Service, the import tax on automobiles with engine displacements over 1,500cc has been cut into half to 1.6 percent. The tariff on cars under 1,500cc has been lowered from 5.3 percent to 4 percent.

European auto brands are announcing discounts on their cars.

Jaguar Land Rover Korea said that it will lower the price of all models by on average of 1 percent starting this month. The company now sells its Jaguar XF 2.2 Diesel for 60.9 million won ($53,280), 4.5 million won less than the previous price, while the XF 2.0 model is selling for 59.9 million won after a 6 million won discount.

The British auto brand had a good first half of the year in Korea after selling 871 units, up 43.1 percent from a year earlier. It will release three new models in the second half: The F-Type, XFR-S and an all new Range Rover Sport.

Volkswagen Korea said that 16 models in its lineup will get discounts. Its flagship sedan, the Phaeton 4.2 V8 LWB, will get a 1.8 million won deduction to 127.4 million won. Tiguan, the only SUV to be ranked in the top 10 selling imported cars in Korea, will get a 500,000 won discount.

Mercedes-Benz Korea is also cutting its prices by an average of 1 percent, offering 300,000 won to 3.4 million won discounts. The German auto brand added that the new E-Class released last month already has a tariff-reduced sticker price, and the M-Class is not included since it’s manufactured in the United States.

Super premium auto brand Rolls Royce said it is joining the party, cutting 8 million won from the price of its Phantom Extended Wheelbase. Even after the discount, the price of the car is still above 700 million won.

Industry insiders said aggressive pricing by European automakers will pressure Korean automakers, which have been losing ground on their home turf.

The nation’s five automakers - Hyundai, Kia, GM Korea, Ssangyong, and Renault Samsung - sold 4.35 million vehicles worldwide from January to June, up 5.6 percent from a year ago. However, the growth was overseas. At home, the combined sales of local automakers reached 672,813 units, an on-year decrease of 2.7 percent.

In fact, among the five automakers, Ssangyong Motor was the only one that reported an increase in domestic sales compared to a year ago.

In contrast, sales of imported cars reached a record 74,487 units in the first six months of this year, up 19.7 percent from a year earlier, according to data from Korea Automobile Importers and Distributors Association. Its market share in the nation’s passenger vehicle market is nearly 12 percent.

In June, 12,792 foreign cars were newly registered, which was a 4.6 percent drop from May, but Kaida said that doesn’t signify a slowdown of imported car sales.

Experts said foreign automakers will further target young customers in the second half with small cars at more affordable prices. Kaida data shows more than half of imported cars sold in this first half were vehicles with engine displacements under 2,000cc.

Volkswagen last week released the seventh-generation of its popular hatchback Golf under 30 million won. It aims to sell 5,000 units for the rest of this year. Mercedes-Benz is preparing to release its A-Class in this second half.

To fight the imports invasion, local automakers also came up with sales promotions for this summer. However, since not many new models are about to come out in the second half, they expect a tough challenge.