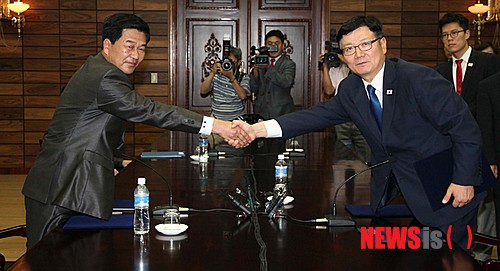 South and North Korea agreed to reopen the Kaesong Industrial Complex and approve the visit of Southern business owners to the jointly-run factory park that has been shuttered for about three months.

Negotiators from the two Koreas had all-night-long marathon discussions at the low-level talks held in the Tongil (Unification) Pavilion, on the Northern side of the truce village of Panmunjom, starting Saturday morning and a joint statement early yesterday.

The statement says they will allow Southern business owners based in the complex to enter there on July 10, Wednesday, and check the maintenance of their facilities, equipment, and plants in the venture park where operation has been halted since May.

The two governments will also approve for the businessmen to bring their assets and raw materials stuck in the complex, in order to continue their business with their partners in South Korea.

North Korea also pledged to guarantee the safety of South Koreans who would enter the complex for the resumption of the complex and allow their communication with the South.

Previously, when the last remaining seven South Koreans stayed in the complex for the negotiations with North Korea over the unpaid wages and taxes, the Southern people were effectively held as “hostage,” a Unification Ministry official told reporters after they returned to the country on May 3.

As soon as all preparations are completed for resumption, they will reopen the complex, the joint statement read. To arrange some rules to prevent further disruption, the two Koreas will hold an additional meeting on July 10.