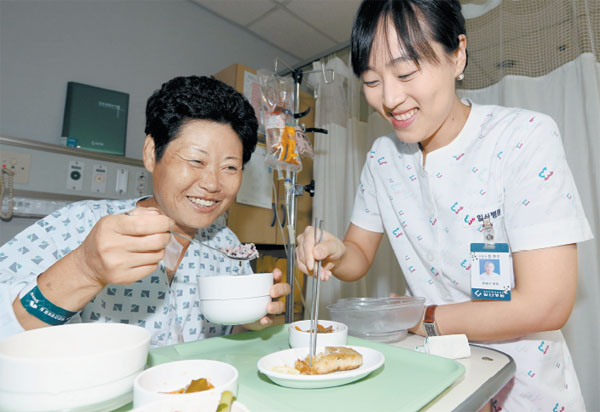 A nurse helps Park Jong-yeon, 52, who underwent cancer surgery, eat on Wednesday at Ilsan Hospital, which was designated in a government pilot project as a caregiver-free hospital in Goyang, Gyeonggi. By Kim Sang-seon

South Korea, Taiwan and China are the only countries in the world where patients’ families and privately employed caregivers stay next to hospital beds 24 hours a day to look after the sick, either family members, or for caregivers, their clients.

This particular medical caregiver system, which has been in place for decades, stems from a lack of medical state budget and deeply-rooted family values.

“In developed countries, the care service for patients is part of a nurse’s responsibility. But in Korea, that responsibility falls on patients themselves and their family members,” said Ahn Hyung-sik, professor of preventive medicine at the medical school of Korea University.

Ahn notes in his report submitted to the National Health Insurance Corporation last year that 19.3 percent of inpatients privately hire caregivers, while 34.6 percent of them are cared for by their families.

And that is more than they pay for hospital bills of 2.31 million won over the same period. What is more worrisome than the ballooning caregiver service is the possibility of the spread of viruses through visits by families and caregivers.

Having recognized the long-held problems associated with the caregiver system, the government initiated a pilot project to run hospitals without private caregivers by requiring nurses to shoulder the care responsibility.

When the JoongAng Ilbo visited the National Health Insurance Service Ilsan Hospital in Goyang, Gyeonggi, Tuesday, a nurse named Jung Hu-joo was helping a cancer patient named Park Jong-yeon have her dinner by feeding her directly, a job long considered belonging to caregivers.

“I did not expect a nurse to take care of me like this,” said a surprised Park while having dinner.

Before the Ilsan hospital introduced the pilot program, Park’s daughter had to stay in her hospital room 24 hours a day after Park was diagnosed with colorectal cancer in May.

“I felt really sorry for my daughter to look after me all the time because I know how busy she was raising her twin children,” said the patient. “But I could not hire a private caregiver because of the high cost.”

But things began to change for Park when the hospital adopted the Ministry of Health and Welfare program last month. Under the new program, Park’s family or others can only visit Park from 10 a.m. to 8 p.m.

Now nurses at the Ilsan hospital carry out tasks such as helping patients take showers or eat.

“Now nurses at our hospital check on their patients every 30 minutes [to carry out their additional responsibilities],” said Kim In-ja, chief nurse at the Ilsan hospital.

Under the government-sponsored program, the Ilsan hospital opened 86 of its hospital rooms free of private caregivers or family members. To meet the demands of the patients in care service, the hospital employed 23 new nurses to make the ratio of patients to nurse 1 to 6.4.

Besides the Ilsan hospital, 12 other medical institutions such as Inha and Sejong hospitals joined the new policy drive. The government provided the 13 hospitals with 13 billion won in state funding to help them adapt to the new policy.

The government plans to extend such programs to all hospitals in the country in an eight-year-program, starting from 2015, after evaluating the results of this year’s pilot program.

Increasing the number of nurses to take more responsibility looms as the most needed task for the government to take in order for the program to succeed.

“The number of graduates from nurses’ colleges will increase starting from next year. And we are planning to induce those currently in the private caregiver industry to work as geriatric care helpers at senior nursing centers,” said Lee Chang-joon, director of the welfare medical policy team at the Welfare Ministry.