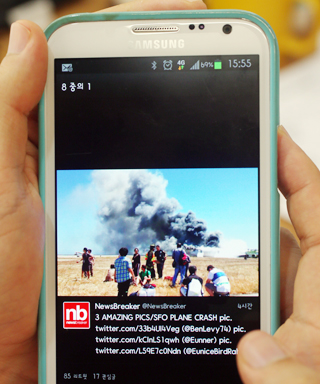 David Eun, executive vice president at Samsung Electronics, who was on the plane that killed two and injured dozens, posted updates and photos of the burning Boeing 777 jet from the scene, captivating Internet users.

Eun’s posts quickly increased his number of followers to more than 22,000 by yesterday afternoon.

“Fire and rescue people all over the place,” he wrote in his second tweet.

Eun’s tweets and photographs were quoted by international press including CNN, ABC and NBC, as well as Korean media.

He asked his friends not to call him, saying he was okay and that “most people are totally calm.”

Along with Eun, Sheryl Sandberg, chief operating officer at Facebook, was widely cited on SNS.

“My family, colleagues and I were originally going to take the Asiana flight that just crash-landed,” Sandberg wrote on Facebook. “We switched to United so we could use miles for my family’s tickets.

“Our flight was scheduled to come in at the same time, but we were early and landed about 20 minutes before the crash. Our friend David Eun was on the Asiana flight and he’s fine.”

Krista Seiden, a product marketing manager at Google who was in the airport to board her flight, posted lively photographs with updates.

“People being evacuated via the emergency slides at the plane,” Seiden tweeted, with photographs of the smoking plane.

“Breaking news update: smoke appears to be getting worse, lots of emergency personal at site .?.?. As the smoke lifts a bit there is no tail in sight.”

Meanwhile, unverified rumors regarding the Asiana crash were widely circulated by Internet users claiming the plane crash may be “the curse of seven.”

“There were 77 Korean passengers on board the Boeing 777 flight and it crashed on July 7 [Korean time],” wrote one Internet user on Web. “Isn’t this too good to be a coincidence?”

Another Internet user wrote, “when we add up numbers of the Asiana flight number OZ214, it is 7, again.”

“The number of Japanese and Chinese passengers are 142 and when we add these numbers up it’s also 7.”