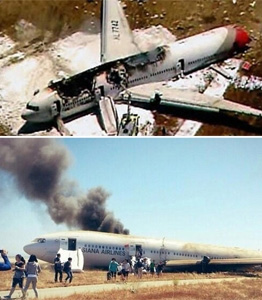 The Boeing 777 plane, which departed from Incheon International Airport, caught fire as it crashed shortly before noon local time, according to the U.S. Federal Aviation Administration. There were a total of 307 people aboard the Asiana Flight 214.

Passengers scramble down inflated safety chutes as smoke billowed out from the wreckage as firefighters contained the flames.

The airport spokesman said yesterday that one person was unaccounted for and 181 people taken to local hospitals.

There were 291 passengers and 16 crew members. A video clip posted on YouTube showed the jet’s tail ripped off on the runway and the top of the aircraft’s fuselage burned off exposing the interior of the plane. The engine and landing gear also was damaged.

Eye witnesses claimed the plane as landing was unsteady.

The U.S. National Transportation Safety Board said it was sending a team of investigators to San Francisco to determine the cause of the crash.The FBI said there was no evidence that the crash was an act of terrorism.

The Korean Foreign Ministry said yesterday that it set up a task force to check the crash investigation process with the consul general in San Francisco.

This is the second time in the past two decades that Asiana, the nation’s second leading airline, was involved in a major passenger jet accident.