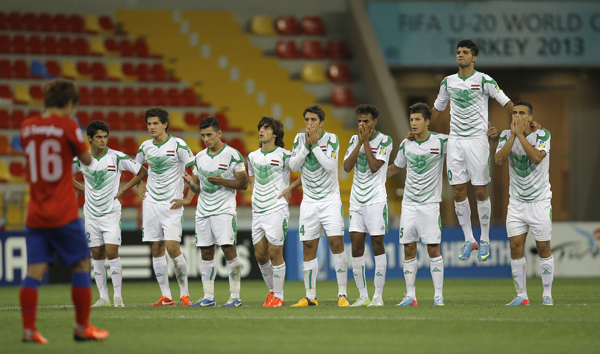 Iraq’s Farhan Shakor, second from right, jumps during the penalty shootout as Korea’s Lee Gwang-hun, left, walks back after missing his team’s final penalty kick during the Under-20 World Cup quarterfinal match between Korea and Iraq, in Kayseri, Turkey, Sunday. [AP/NEWSIS]

After displaying tenacity with three equalizers, Korea lost to Iraq on a penalty shootout at a quarterfinal match of the U-20 World Cup in Turkey on Sunday.

Iraq striker Farhan Shakor converted the decisive penalty in a 5-4 victory, sending home Lee Kwang-jong’s team, which was only a victory away from tying Korea’s best-ever result at the biennial intercontinental event. Korea advanced to the semifinals at the 1983 edition in Mexico.

Lee’s squad is only the fourth team from Korea to reach the quarterfinals or higher at a U-20. It beat Colombia on a penalty in the Round of 16.

“I am satisfied that the players showed a good game,” said Lee, who led Korea to the Round of 16 at the previous U-20 World Cup in Colombia in 2011. “People said Korea is a weak team, but such a stingy assessment hurt the players’ pride and inspired them to win.”

Korea got past the group stage as a wild-card team from Group B. “I said to them that they will do good if they become united” Lee said. “Mentally prepared, we could face off against world-class teams.”

Iraq, which became the first Asian team since Japan in 1989 to enter the last four places at a U-20 World Cup, will play Uruguay in the semifinal on Wednesday.

In a replay between the 2012 Asian U-19 Championship finalists, defender Ali Faez set up Iraq’s revenge with a 20th-minute penalty effort after Ali Adnan earned a foul from Kim Hyun. But Kwon Chang-hoon leveled just five minutes later, heading home a throw-in pass by Shim Sang-min. A 42nd-minute goal by Sakor put Iraq ahead, but Kwon created another chance with his free kick four minutes into the second half, which Lee Gwang-hun connected home.

The two teams entered a 30-minute extra time and when Shakor’s 118th-minute goal almost seemed to secure Iraq’s win, Jung Hyun-cheol forced a penalty shootout with a mid-range shot in the closing seconds that deflected off a defender into the net.

In another U-20 quarterfinal match on Sunday, Ebenezer Assifuah scored his second goal in the closing minutes of extra time as Ghana beat Chile, 4-3, to reach the semifinals.

Assifuah’s header completed Ghana’s comeback after Angelo Henriquez put Chile up, 3-2 in the eighth minute of extra time. Seidu Salifu equalized in the 113th after being set up by Clifford Aboagye. Both teams were locked at 2-2 in regulation.

“This was really a cliffhanger match,” Ghana coach Sellas Tetteh said. “That is what this tournament is about, to show good football and to entertain people.”

As the only African nation to win the event in 2009, Ghana will next play France while Iraq takes on Uruguay in the other semifinal.

Tetteh praised his team for coming from behind for a second straight match. In the previous knockout round, Ghana beat Portugal, 3-2, with two late goals.

“We didn’t panic, we still played our type of football,” Tetteh said. “I have to give credit to the boys .?.?. this was a complete performance from a determined team.”

Earlier in the tournament, Ghana escaped elimination after losing group matches to Spain and France before advancing on goal difference after a 4-1 win against the United States.

“It’s a wonderful feeling for us to progress to the semifinal,” Tetteh said. “We started from a very low point. The progression of this team is wonderful.”