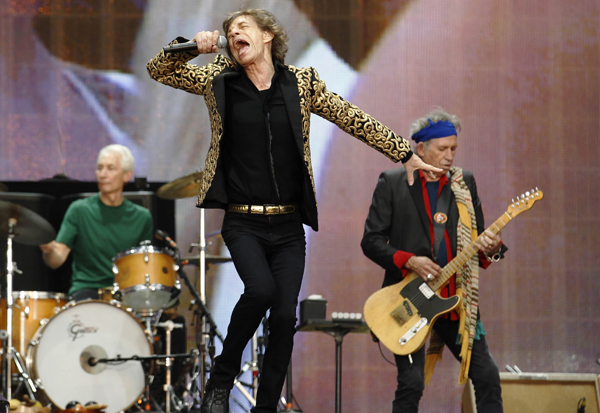 From left to right, drummer Charlie Watts, Mick Jagger and Keith Richards of the Rolling Stones perform at the British Summer Time Festival in Hyde Park in London on Saturday. [NEWS1/REUTERS]

LONDON - The Rolling Stones blasted through the past into the present on Saturday with a rip-roaring show in London’s Hyde Park that paid homage to their last concert here 44 years ago.

Frontman Mick Jagger strutted, howled and belted his way through a two-hour set that gave a nod to founding member Brian Jones, whose death in 1969 turned their last appearance at the royal park into a tribute.

“Anybody out there who was here in 1969?” Jagger called out to applause from a sea of grey hair after opening with “Start Me Up” and “It‘s only Rock and Roll”.

“Well welcome back, it’s nice to see you again.”

But two days before their appearance, the 27-year-old Jones drowned in his swimming pool under the influence of drugs and alcohol, turning that concert into a commemoration.

Now the band, with an average age of 69, stormed through the classics from “Brown Sugar” and “Honky Tonk Woman” to “Jumpin’ Jack Flash” and “Sympathy for the Devil” - with rubber-lipped Jagger strumming the guitar for the latest single “Doom and Gloom”.

The Stones bounded across the stage and along a catwalk stretching into the sea of 65,000 fans gathered on a sultry summer evening in 21st-century central London, sipping beer. The unmistakable aroma of marijuana wafted in the air.

The night belonged to the reconciliation of past and present for a crowd of old and young steeped in Stones lore, watching the band on stage with images of past concerts occasionally flashing past on big screens rising up behind the band.

Jagger donned a white smock-like outfit similar to the one he wore in 1969, played the harmonica and quoted a piece of poetry. The references to Jones and the old days were unmistakable even if his name was never mentioned.

Taylor - who left the Stones in 1974 - appeared on stage for a rollicking version of “Midnight Rambler,” where he delivered a masterclass in the guitar solo before jamming in front of Watts with Wood and Richards.