Teen has big dreams for friendship

Teen has big dreams for friendship 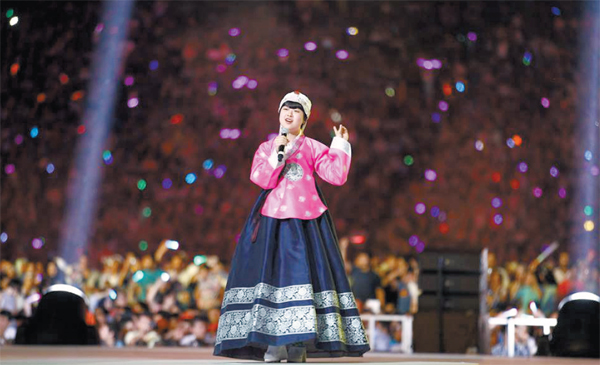 A popular Turkish song “Bo? Bardak (an empty glass)” says, “If we end our relationship as good friends, we could say hello when we encounter each other in another city.”

At a huge sports stadium filled with 25,000 people, Choi So-yeong, an 18-year-old Korean high school girl, was dressed in pink hanbok attire and didn’t seem to be nervous when she sang the popular Turkish song.

She was one of 2,000 students from 140 countries to participate in the annual 11th International Turkish Language Olympiad held in Ankara, with her contribution to show her love of the Turkish language and culture to local people during the 15-day contest in June.

At the closing ceremony on June 17, Choi was selected to sing in the Ataturk Olympic Stadium in front of an audience that included the Turkish Prime Minister, Recep Tayyip Erdogan.

“I have never sang a song for such a group of people,” Choi said. “But during the weeks-long competition, I performed Turkish songs several times, including on a television show on a local channel in Turkey.”

When she finished the song, she made some comments in Turkish to celebrate Turkey’s Father’s Day, and the Turkish Prime Minister suddenly stood up from his seat and waved his hands approvingly.

“I love the song’s lyrics and its motions,” she said. “Turkish songs have more vibrations than Korean songs.” The student of Changhyun High School in Suwon, Gyeonggi, was awarded a silver medal for her singing and a bronze for her speaking. 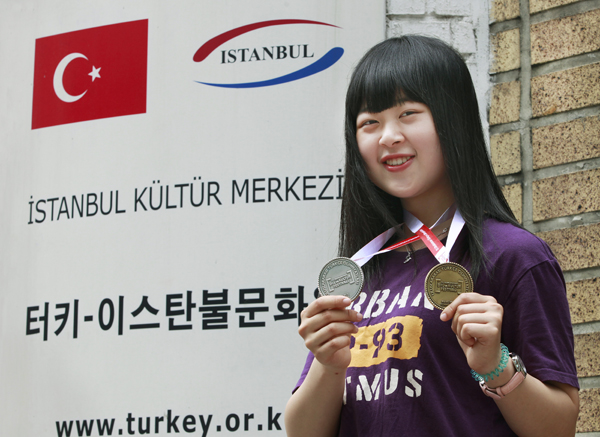 Choi shows off her bronze and silver medals earned in the singing and speaking contests at the Olympiad. By Park Sang-moon

Prior to the competition, she had taken Turkish language courses for a year at the Istanbul Cultural Center in Seoul.

The head of the center, Huseyin Yigit, said he selected Choi as the Korean representative to the competition sponsored by the Turkish government. “We recruited applicants and held our own competition to select the candidate,” Yigit said. “The participants in the competition are playing a role as a ‘bridge’ between the bilateral relations between Korea and Turkey.”

During her stay in Turkey, the competition was not the only thing Choi experienced. Rather, she spent a lot of time hanging out with her competitors and local people and building up friendship with them.

“It was a totally new experience for me, communicating with the others in Turkish and not English,” she said. “Turkish people are really warm, particularly toward Koreans. I think it is probably because of a shared brotherhood between the two nations.”

Turkey deployed a total of 14,936 soldiers to South Korea during the 1950-53 Korean War, which was the fourth-largest group following the United States, the United Kingdom and Canada, according to the Ministry of National Defense.

Choi said she wants to study in a local university in Turkey after she graduates from high school. “When I first learned the Turkish language, I hoped to be an interpreter but I changed my mind,” she said. “I want to do more to help bilateral ties between the two countries, not just translate or interpret.