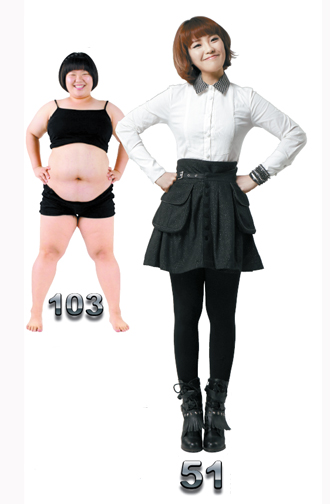 Comedian Kwon Mi-jin used to weigh 103 kilograms (227 pounds) but she shed nearly half of her body weight in five months on a segment of the popular TV show “Gag Concert.” Provided by Kwon Mi-jin

Kwon Mi-jin was born a female, but for most of her life she wasn’t seen as a woman. The 25-year-old comedian, who is 164 centimeters tall (5 feet 4 inches), used to weigh in at 103 kilograms (227 pounds) and was treated not as a woman or a man, but only as an obese person.

When she lifted a 19-liter (5.02 gallon) water bottle onto a water purifier at work, a task which evokes groans from a normal-sized man, she was left to do it alone.

Growing up in a loving family, Kwon always felt good about herself, though. “I was big from birth, so I was accustomed to the word ‘pig.’ My every ID and password starts with pig,” said Kwon with a smile. “But I never tried to go on a diet because I thought I was fat but still cute and pretty.”

However, people around Kwon didn’t think of her the way she thinks about herself. “Everyone looked at me when somebody farted, even though I hadn’t. There were discriminations.”

About two years ago, she played one minor role after another on the popular KBS2 TV show “Gag Concert,” then received an offer from her senior comedians for a segment called “Health Girl.”

That is how Kwon and her fellow female comedian, Lee Hee-kyung, who weighed 86 kilograms, went on a nationwide diet under the guidance of other two senior comedians for the weekly comedy show.

Clad in sport bras and shorts revealing their rippling bellies and thick legs, Kwon and Lee introduced a series of comical yet helpful gym exercises to the audience.

Most viewers thought of the segment as another lighthearted skit in which female comedians make fun of themselves, because Kwon and Lee were way too heavy to reach their goal weight of 55 kilograms in five months.

The “health girls,” however, stuck to low-fat, low-salt diets and worked out for hours everyday even when the cameras were off. They stepped onto a scale every week in the presence of cameras and were punished with tougher exercises if they failed to lose weight.

The segment came to an end but the obscure rookie comedian became a star. She signed endorsement deals, landed a role as a radio show guest, participated in magazine photo shoots and published her own diet book, “Health Girl Kwon Mi-jin’s Fun Diet, Which is Even More Entertaining than a Gag Concert.”

Published in May, the book has sold more than 12,000 copies. Given the saturated publishing market, the book is a hit.

As of the first week of July, Kwon’s book is ranked third on the top 10 best-selling list of the health category at Kyobo Bookstore, the nation’s largest book retailer, along with other six diet-related books.

It is no wonder that seven diet books make up the top-10 health category.

Korea was the least obese among the 30 OECD countries in 2009, with only 3.5 percent of the population having a body mass index over 30, which is considered obese by the World Health Organization.

Yet a study conducted last year by the Samsung Economic Research Institute found that 95 percent of Korean women believe they are overweight.

Luckily, Kwon is not overweight anymore and she entered the spotlight after she lost nearly half of her body weight. Is she happier than she was before? Recently, the Korea JoongAng Daily sat down with Kwon for an interview. Here are some excerpts: 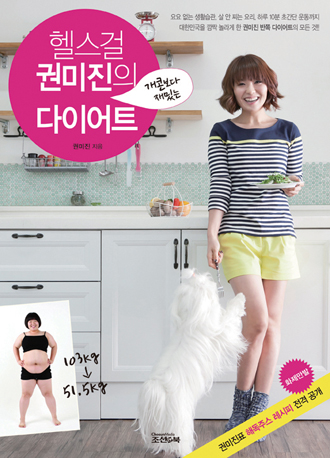 Q. What is the biggest change before and after you were on “Health Girl?”

A. Before I went on a diet, I thought the world would be totally different (if the diet succeeded) even though I don’t know what (the changes) are. It’s not a whole different world, but I got to know the small pleasures of life, such as wearing rings, necklaces and duck down feather jumpers after “Health Girl.” I didn’t feel chilly at all when I hovered around 100 kilograms and couldn’t wear accessories because nothing fitted me. I plan to buy swimsuits for the first time in my life this summer.

The thing is, I used to wear skirts and girly headbands before the diet, but people didn’t see me as a woman, I guess. I still wear the same headband, but now I receive a lot of compliments over it and they ask me where I got it.

Nobody helped me when I replaced a water bottle on a water purifier but now people tell me women shouldn’t do that. I do the same things but people treat me differently, which makes me feel bitter.

Are you happier than before?

I was happy when I was around 100 kilograms. But the happiness is somewhat different as I got to know the small pleasures of life.

Many Korean women are obsessed with how they look. It is also hard to find obese women on the streets of Seoul, unlike in western countries. Haven’t you tried to go on a diet before?

I thought I was fat but still cute and pretty. I was big from birth, so I was accustomed to the word ‘pig.’ I remember I started eating red pepper-marinated chicken when I was 4 or 5. My every ID and password starts with pig because I like the nickname. If someone told me I was fat, I used to tell them ‘Look at my eyebrows. They are really pretty.’

My mother once forced me to work out when I was a teenager and I ran away from home. Ever since then, diet has become a taboo in my family. Looking back, I think the diet would succeed because I never tried it before and didn’t know how painful it is to shed weight.

If you were happy with your life even when you weighed 103 kilograms, how did you end up doing the “Health Girl”?

I was watching “Gag Concert” with my peer comedians one day at home and I choked while I laughed. I couldn’t breathe. If there were no one around, I would have died. A few days later, we had an idea meeting and I shared the anecdote to make others laugh. Upon hearing it, Lee Seung-yoon suggested that I do “Health Girl.” He was really concerned about my health.

What major health problems did you suffer from?

My nickname was general hospital. Even my intraocular pressure was high, so I had bulging eyes. They couldn’t find veins on my arms and hands and they couldn’t give me any saline solution. After I shed the weight, I hardly ever come down with a cold.

Of the many chapters in your book, the part where you candidly mentioned your slump was impressive. Tell us more about it.

I ended “Health Girl” at 58 kilograms and I instantly gained 10 kilograms right after the show. After the yo-yo effect, I avoided meeting people and was obsessed with how I looked. I went on binges when nobody was around me and tried all the imaginable diets that I could. I thought of myself as cute and pretty when I was around 100 kilograms but I found myself ugly when I was 68 kilograms. An “aha” moment came. I told myself, “Let’s do it for me, not for others.” I later realized a lot of women go on a diet not for themselves, but for others, which makes me sad.

What diet did you try during the downtime?

Most of them were one-food diets. I only ate pork skins, then resorted to a Danish diet and oriental herbal medicines. I even ate salts to drink more water.

Are you worried about your career as a comedian after the diet? Still, a majority of ugly and overweight comedians get some advantages over those who are not.

It could be an asset but there are many other comedians who are good-looking but good at making others laugh. I don’t worry about my career because I have a character of my own now.

You lived as a heavy woman for more than 20 years and now you are living a different life at a svelte 52 kilograms. After experiencing two extremely different worlds, what would you say to women who are overweight?

I think it is right to go on a diet if you have health problems. I don’t think it is only to be presentable.

What are your immediate plans?

I’m not the type of person who plans ahead. Looking back, I just followed my heart. I joined a drama club back in high school because that was the only way I could skip regular classes. I came all the way (from Yeongju, North Gyeongsang) to Seoul two days after I graduated from high school with the hope of acting on theatrical stages. It was a spur-of-the-moment decision after feeling thrilled to see others laugh at my lines at the drama club. After I settled down in Seoul, I cleaned up small theaters at Daehangno and plastered theater posters here and there for two years before I was scouted by a KBS producer. Ever since I became a comedian, I was desperate for a single line until I became a lead character (in “Health Girl”) one day and now I have a book of my own and give lectures on dieting. I don’t know what my next plan would be. I just want to stay focused on what I’m doing now.