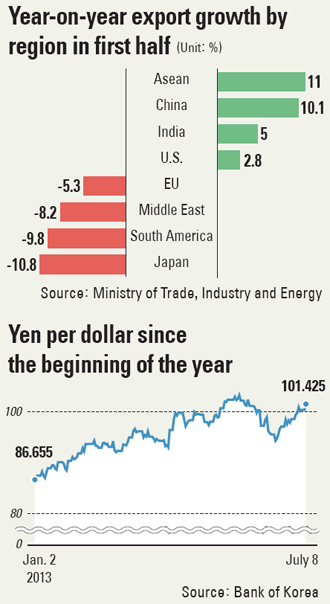 Was the fear of Abenomics threatening Korea’s exports with its drive for a weaker yen just a scare? And is this the end of Abenomics or is its impact just beginning?

It has been more than half a year since Shinzo Abe swore he would force Japan out of a decade-long deflation by pumping liquidity into the market through bond purchases similar to that of the U.S. Fed’s quantitative easing.

Korea’s exporters were particularly alarmed as the yen, which closed at 85.86 against the U.S. greenback at the end of last year, fell as low as 103 in May.

However, various reports from Korean government agencies show that exports, although not thriving as they did in the aftermath of the late-2008 financial crisis, have held steady.

In the first six months of the year, Korea’s exports inched up 0.6 percent compared to the same period last year.

“The reason the weakened Japanese yen didn’t have much influence on Korean exports was a significant increase in exports to emerging markets, including China and Asean countries,” said an analyst at HMC Investment Securities.

From January through June, exports to Japan fell 11.5 percent year-on-year, while exports to Europe were down 3.8 percent.

Meanwhile, exports to Asean countries grew 10 percent, while those to China expanded 9.8 percent.

As a result, Korea’s trade surplus at the end of June stood at $26.4 billion with China and $14.4 billion with Asean nations. Export was particularly driven by growing demands for Korean mobile telecommunication products, including smartphones in China.

But is Korea absolutely in the clear?

“The yen’s risk still remains large,” said the HMC Investment Securities analyst. “The depreciation of the yen will become more vivid as it is now clear that the U.S. Fed will start winding down its stimulus program later this year and this will not only strengthen the U.S. dollar, but weaken the Japanese currency.

“As a result, a reduction of Korea’s exports will be inevitable [in the second half], although how much will depend on the global economic situation.”

Lately there have been signs that the yen is once again depreciating. Last month it strengthened to trade in the 90s against the U.S. dollar after June 4, when the market closed at 100.27. But as of Friday the yen once again topped 100.

HMC Investment Securities speculates the yen will trade at between 103 and 104 this month.

Some experts say the impact of Abenomics has not yet hit the Korean export industry with full force since it takes about six months before the depreciation of the yen is actually reflected in the global market. “Korea’s exports will face their biggest challenge in the second half,” said an analyst at the Korea International Trade Association.

If so, major export sectors like steel, automobiles and shipbuilding, which compete fiercely with Japanese goods, will further drop compared to the first half.

Hyundai Research Institute in a report earlier this year projected that when the Japanese yen trades at 100 against the dollar, Korea’s exports shrink 3.4 percent, while when the yen further depreciates to 110, exports nosedive 11 percent.

But not all agree that the yen will continue to be a threat, saying Korean companies have already built resilience against further depreciation.

“The possibility that the yen depreciating to 100 will have a powerful negative impact as it did in the first half will be low,” said a KTB Investment and Securities economist. “The adaptation to the yen fluctuation has increased, while the speed at which the yen has been falling is relatively milder” than in the first half.

The analyst also added that the Korean currency’s own depreciation earlier this year also mitigated the impact of the weak Japanese currency.