Corporate bonds get $5.9B boost

Corporate bonds get $5.9B boost 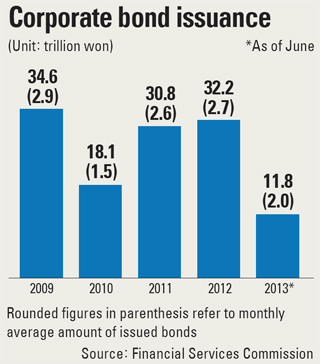 In a bid to normalize the country’s frozen corporate bond market, the government will inject 6.4 trillion won ($5.9 billion) in emergency funds, the financial regulator announced yesterday.

Under the plan mapped out by the Financial Services Commission, Korea Development Bank and other financial institutions will acquire corporate bonds issued by companies and then issue primary collateralized bond obligations (P-CBOs) backed by the Korea Credit Guarantee Fund.

P-CBOs are a security credit product backed primarily by corporate bonds. Financial firms like brokerages buy the bonds, part of which are guaranteed by institutions like the Korea Credit Guarantee Fund, thereby reducing underlying risks.

Of the 6.4 trillion won, 150 billion won will come from the Korea Credit Guarantee Fund followed by 350 billion won each from the Ministry of Strategy and Finance and Korea Finance Corporation.

The Bank of Korea will inject fresh liquidity to Korea Finance Corporation so it can help the Korea Guarantee Fund to come up with enough money.

Companies with low credit ratings whose corporate bonds mature between second half and the end of next year will benefit from the government’s emergency plan, the financial regulator said.

Details for determining companies eligible for the government rescue will be finalized by the FSC’s review committee based on companies’ own plans to normalize corporate operations.

Most of the funds are likely to be used to buy corporate bonds issued by construction, shipbuilding and shipping industries, the FSC said.

“Among companies whose corporate bonds’ maturity date is nearing, companies with some 4 trillion won in corporate bonds will be able to survive thanks to the government’s emergency support fund,” said Jeong Chan-woo, vice chairman of the FSC, in a press briefing.

There are a total of 10 trillion won worth of corporate bonds with credit rating A and lower set to mature in the second half of this year, and 4.7 trillion won of those were issued by builders, shipbuilders and shipping companies.

“Companies will have to pay back 20 percent of the amount of maturing bonds in return for getting government financial support,” Jeong said. “The remaining 80 percent of corporate bonds will be taken over by the Korea Development Bank and these bonds will be resold to financial institutions [10 percent], creditors [30 percent] and the Korea Credit Guarantee Fund [60 percent].”

Brokerage firms and other financial institutions will raise a combined 320 billion won to join the government’s drive to invigorate sluggish corporate bond market.

The government will also allow separate taxation of dividends for investors who invested in corporate bond-type funds whose portfolios contain at least 30 percent of bonds with credit rating BBB or lower. This will help investors with high-risk financial products to pay less taxes, the FSC said.

“The government’s plan will be effective in the short term to help revive the corporate bond market,” said Kim Sang-hoon, an analyst at Shinhan Investment and Securities. “We have to wait and see which industries are picked for the government support.”

Yesterday’s measure was announced shortly after FSC Chairman Shin Je-yoon said the agency should come up with a plan to normalize the corporate bond market. At a June 24 FSC meeting, Shin said, “The increase in volatility in the financial market is expected to affect the capital market for corporations, including the bond market.”