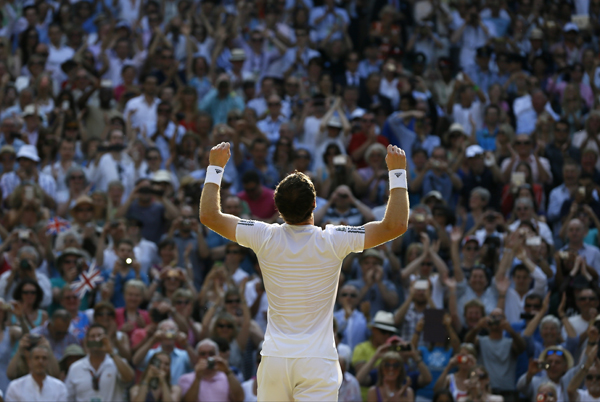 Andy Murray of Britain celebrates after winning the men’s singles final against Novak Djokovic of Serbia at Wimbledon in London, Sunday. Murray won, 6-4, 7-5, 6-4 to become the first British man in 77 years to raise the trophy at the All England Club. The second-seeded Murray beat the best in Djokovic, a six-time Grand Slam winner known for both a mental and physical fitness built to handle what he faced Sunday: A crowd full of 15,000 partisans rooting against him, to say nothing of Murray himself, who, since falling to Roger Federer in the final last year, had shed some unwanted baggage of failure in the big stage by winning the Olympic gold medal on Centre Court, then following that with his first Grand Slam title at the U.S. Open. Murray put his name beside that of Fred Perry, the last British man to win Wimbledon, back in 1936. Those words don’t have to be written again. [AP/NEWSIS]